As if there weren’t enough of these fake casting sites around, yet another one has popped up in Texas.  This one is called Casting 360, and is running ads like this one on job boards and websites around Texas: Movie Extras, Actors and Models wanted. PT/FT in Frisco, TX. 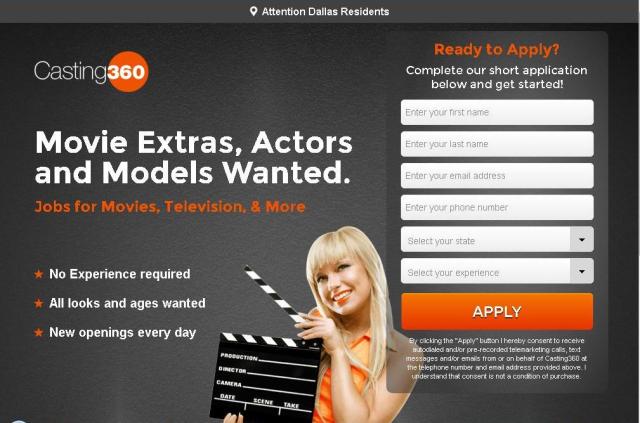 Let me be clear here. If you click on that link, you will NOT be taken to a place where you can apply for a job.  You’ll be taken to a page where you must enter your name, address, email address, and phone number, and agree to the following when you click apply for the advertised “job”: By clicking the “Apply” button I hereby consent to receive autodialed and/or pre-recorded telemarketing calls, text messages and/or emails from or on behalf of Casting360 at the telephone number and email address provided above. I understand that consent is not a condition of purchase.

They don’t want to hire actors. They want actors to pay them for a service. Is it a service that would-be actors or models need? In my experience, the answer is no, but you’ll have to make your own decision. Before you decide, make sure to read everything on this page, including the disclaimer at the bottom.

“Disclaimer: Casting360 is not a talent agency, employer or a talent scout; the site is only a venue. Casting360 does not promise or facilitate employment. The number of casting calls available varies by location, roles available and the level of experience required. As with any business, results may vary, and will be based on individual capacity, experience, expertise, and level of desire. There are no guarantees concerning the level of income the user may experience.”

In general, if someone runs paid ads, they’re selling you something. Casting directors are always looking for talent, but they advertise “to the trade”, if they advertise at all. Typically, there are far more actors chasing jobs than there are casting directors in dire need of actors.  The exception are big crowd scenes where the (unpaid) extras become the audience for something — and in that case, the casting director simply puts the word out to local radio & TV stations for all the free publicity they want, with no need to use “telemarketing, email marketing, or direct marketing” — and certainly no charge to the would-be extras.

What makes me think this company isn’t legit, when I didn’t fill out their form or speak directly to them? It’s simple: they’re selling something that costs enough that they can afford to place ads all over Texas, from Craig’s List to Facebook, and several newspapers as well. Legitimate casting directors don’t have that kind of money to spend — and they don’t need to run ads to attract talent.

If you want to get your first acting job, here are some places to start. They’re all free. All you have to do is read the instructions, fill out some information, submit a photo and then show up for the audition (or in some cases, just show up to work as an extra). Some of them don’t pay anything except in experience and clips for your demo reel, and some of them pay standard local rates for extras and background players.

Other “Casting Sites” to Avoid

As noted above, this isn’t the only company making a similar pitch to those who dream of becoming a model or actor. Here’s a list of some companies with a similar pitch — and some mind-boggling price tags for services that can be had much cheaper elsewhere, or aren’t needed at all. As far as I know, none of these companies commit any kind of illegal fraud, but I have heard horror stories from customers of each one who felt that they were misled about what they were buying.

Here’s my list of suspect or bogus casting sites operating in Texas, in no particular order: Actors Club, Actors Models and Talent for Christ, CastHub, Casting 360, Casting Hub, Elen’s Kids, ExploreTalent, Nine9 the “Unagency”, One Source Talent, and ModelandTalent.tv (which shares a physical street address with Casting Hub). If you’re considering paying a fee of more than $75 to any online casting site, make sure to Google the company’s name with words like beware, scam, fraud, sucks, rip-off, refund, warning and problem. That will alert you if anyone else has posted their own story about the company you’re considering, so that you can make your own decision about whether it’s worth your time and money.

More importantly, instead of investing in services that promise to make you a star with no training and no experience, invest in a quality film acting school. Here’s a link to the ones my child’s talent agent recommends in North Texas for kids, and here’s a link to the ones recommended for adults. Any one of them can help you on the path to success far more quickly and affordably than one of the online “casting sites”. (My 14-year-old is represented by Linda McAlister Talent, but I am not related to the amazing Ms. McAlister — each of us simply happened to marry unrelated men with the same last name.)

There are a number of legitimate online casting sites that post “breakdowns” — that is casting calls with the “sides” (scripts) — actors use to self-submit themselves for roles. Some of them have sections accessible to anyone, and others have sections just for talent agents to use. Most talent agents require that the actors they represent maintain current demo reels, headshots, and resumes on these sites to make it easier for them to submit talent for roles.

The sites I have personally used (in alphabetic order) include Actor’s Access, Backstage, Casting Networks, and NowCasting. Typically, it costs nothing to join these sites and post a headshot and resume. There is a small ($2-5) fee when you submit your resume for each role, and a fee to host a demo reel and submit that when your submission. There is no charge to you if your agent submits you for a roll. Talent agents are paid only when an actor or model books, and is paid for, a job.

Casting directors post notices of roles, with descriptions of what kinds of actors they want to see, and directions on how to submit for the role. Some ask for a headshot and resume, some want a taped audition, and some want your agent to submit you. The sites send emails when a new role matches your profile (age, race, gender, location, specific skill), and you decide which ones you want to be submitted on. Whether you have an agent or not, these sites are a good gauge of “what’s out there” — but once you’re represented by an agent, follow their lead and advice on whether or not to self-submit.

I'm a Dallas-based marketing consultant and writer, who specializes in helping start-up technology companies grow. I write (books, articles, and blogs) about marketing, technology, and social media. This blog is about all of those -- and the funny ways in which they interesect with everyday life. It's also the place where I publish general articles on topics that interest me -- including commentary about the acting and film communities, since I have both a son and grandson who are performers.
View all posts by debmcalister →
Gallery | This entry was posted in Acting & Circus and tagged acting, acting scams, child talent scams, talent scams. Bookmark the permalink.