The curse. A visit from Aunt Flo. A trip to Camp Flow. Surfing the crimson wave. Falling off the roof. On the rag. Mother Nature’s monthly gift.

Whatever euphemism your family uses for menstruation, it’s a subject that the parents of girls with a disability often dread. Over the past 50 years, American girls have begun entering puberty earlier than ever. Now, some show the first signs of puberty as early as 7 or 8, and a first menstrual period by age 10 is becoming the new normal.

For the parents of a daughter with autism or another kind of neurological challenge, the physical changes, mood swings, and reality of menstruation can create challenges no one really wants to talk about.

The parents of daughters with significant neurological impairments worry about how their daughter will cope with the monthly cycle, how she will keep clean, what impact the bleeding or pain or mood swings will have on her ability to function. The truth is simple. Some girls easily adapt to menstruation. Some do not.

Here a list of tips our pediatrician gave us when we first faced the challenge of helping a teen girl with a mild neurological diagnosis adjust to monthly periods.

“Give your daughter as much information as she can understand. Some caregivers do not find menstruation as much as an issue as they thought it might be. If it does become difficult for your daughter, there are some things that can be done to help.

What if You Could Make It Go Away? 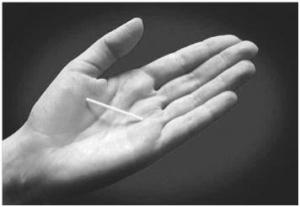 This photo of the Implanon injectable 3-year birth control device comes from the device’s maker, Merck. It is used under a Creative Commons License.

Of course, what I really wanted back when I was facing this challenge was to make the whole problem just go away. I was terrified that my beautiful, trusting teen would fall prey to a sweet-talking boy at school – or a predator she met by happenstance – and wind up as the victim of a sexual assault. With a serious heart condition to go along with her neurological impairment, an unplanned pregnancy could have been deadly, so this was a serious issue for me.

Since our child is very self-sufficient, I knew she could handle her monthly cycle, so it was the birth control aspect that worried me. The first doctor I spoke with discouraged me from even thinking about trying to halt or delay the onset of puberty. He talked about the potential dangers of hormone-based birth control used over a long period, and told me the story of a disabled girl named Ashley whose parents resorted to major surgery and hormone therapy to keep their daughter from entering puberty.

Luckily, I didn’t listen to the first (male) doctor I spoke with. I asked a (female) cardiologist about the problem of puberty and its strain on my child’s heart. Without hesitation she said, “I’ve got one word for you: Implanon.”

Merck’s Implanon is a sub-dermal (under the skin) implant that delivers 3-year birth control. While it is hormone based, it does not contain any estrogen. “It won’t hurt her heart, and for the majority of users, it completely stops or at least minimizes monthly periods,” the cardiologist said.

It’s about the size of a matchstick, and is inserted in the upper arm with a syringe. I am told that it feels like getting a flu shot – it has never seemed to bother our child, but she has had to endure many injections over her lifetime, so she is used to them.

The small device has to be removed after three years. For most patients, it’s removed in a minor surgical procedure done under local anesthetic in a doctor’s office. One family we know has a teenager daughter who must be sedated once a year for dental treatment and any necessary shots. Their doctor has added the removal and re-insertion of her implant to that schedule every third year.

For our child, the device stopped monthly periods altogether. Other families have reported a reduction from heavy monthly flows to occasional, very light spotting. The cardiologist told us it was safe for a patient with the heart defects our child has, and that she recommended it to all of her female patients as the best option – especially for those who needed blood thinners, beta blockers, or other medications that could make bleeding worse.

Our child got her first Implanon when she was 15. She’s 25 now, and on her fourth implant. When she decided at 22 to have it removed, she became pregnant shortly after, and after a closely monitored high-risk pregnancy, she is now the mother of a healthy toddler. She had a new implant inserted after her son’s birth, and her current plan is to have it removed and replaced with a new one on schedule.

Is an Implanon Right for Your Child?

Like any medication, a sub-dermal implant has potential side effects, and can interact with some medications. So the first step is to talk to your doctor to see if it’s safe for your child.

The three-year implant is not inexpensive. In most states, Medicaid will cover it, but it is not covered in all states. Some insurance companies won’t cover it for a child under 18 unless a doctor deems it “medically necessary”. Without medical coverage, it can cost up to $800 to get one inserted, and up to $300 to get one removed.

Compared to the peace of mind the device provided for our family, the cost was not an issue for us. The issue of whether or not 3 years without monthly periods, combined with 3 years of birth control, is worthwhile for a teen with a disability is highly personal. So think about your own child’s abilities, and how she is likely to handle the added stress of monthly periods. Then, if you think avoiding that stress is worthwhile, talk to a doctor – and I do suggest talking to a female gynecologist or physician who is familiar with the problems faced by the caregivers of a daughter with cognitive challenges.

For our family, it was the right decision, and I’d make it again in a heartbeat if faced with the choice once more.

NOTE (1/5/17): There have been many negative articles recently about a medical device called Essure that looks a little like an Implanon. They are not the same. Implanon is a way to deliver birth control medication. It is temporary. Essure is a medical device that blocks pregnancy. An Essure device is permanently inserted surgically into a woman’s Fallopian tubes. The Implanon medication is injected into the arm. Don’t confuse one for the other.

Author’s Note: I drafted this on the request of a friend, who is looking ahead to the onset of puberty for her daughter, who has autism. She wanted a link she could share with other parents, so I offered to post my experience with this issue here. As with anything else on this blog, it’s a personal opinion — I am not an expert, and this article is based on my family’s experience with this difficult subject. I do not work for or own stock in any pharmaceutical or medical company.

I'm a Dallas-based marketing consultant and writer, who specializes in helping start-up technology companies grow. I write (books, articles, and blogs) about marketing, technology, and social media. This blog is about all of those -- and the funny ways in which they interesect with everyday life. It's also the place where I publish general articles on topics that interest me -- including commentary about the acting and film communities, since I have both a son and grandson who are performers.
View all posts by debmcalister →
Gallery | This entry was posted in Family and tagged a caregiver's guide to periods, autism, Birth control for women wth heart defects, Birth control implant, cerebral palsy, helping disabled girls with menstruation, Implanon, menstruation, puberty. Bookmark the permalink.

1 Response to A Disabled Teen’s Caregiver Talks about Periods