Why I Hate the WordPress “Reblog” Feature (And So Should You)

I awoke this morning to an inbox with four notices that content to which I hold the copyright had been “reblogged” by three different bloggers who decided that instead of creating new content themselves, they’d borrow my SEO ranking, research, and writing without permission. There were three such notices last week.

It makes my blood boil every time it happens. If you look above this post, you’ll see a header bar on EVERY PAGE of this website. On the right side, clearly visible, is a link to the site’s No Reblogging, Copyrights and Comments page. And on that page, it says clearly that I do not allow reblogging. 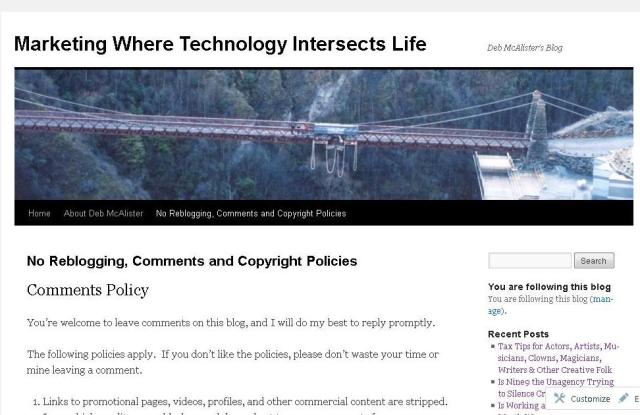 The WordPress “reblog” function can’t be turned off. It allows anyone to appropriate most of anyone else’s content for their own blog — images, headlines, and content. People can add their own comments (positive or negative) and edit the content they are reposting — but to a reader, it appears as if the original author is responsible for the changed content.

Most of the bloggers who steal content this way don’t intend to steal content. They see it as a way to share something they like, build the information library on their site, and (often) view it as a kind of compliment to the original author. Nearly every blogger I’ve sent a DMCA takedown notice to over reblogging (stealing) my content has been shocked that I wasn’t flattered by the theft.

So left me explain it as clearly as I can. If you ask for permission to reuse my material, I will probably give it to you as long as the site you plan to post it on is one I would be pleased to be associated with, and you agree not to rewrite or edit it. But if you don’t ask permission first, you can’t just steal my work without compensation or permission.

One of the bloggers who stole my content yesterday runs a politically motivated site that takes a position on an issue that is actually quite close to my heart — and we’re on the same side of the issue. Had he or she asked for permission to use the content, it would probably have been granted in a heartbeat — and in the case of one of the articles they stole, I have newer information that would have been more appropriate for the blog’s audience that I would have offered.

But by simply “reblogging”, this person denied me the right to make my own decision about whether or not my content was reused, where it was reused, and what a kind of commentary or changes were made to it. And that’s simply unacceptable.

Even if you are the subject of a photograph or article, you can’t post it online without the permission of the copyright holder. It’s an expensive lesson to learn, as reality TV star Khloe Kardashian learned recently.

Just because WordPress inexplicably decided to include a copyright infringement tool in its platform doesn’t make stealing content ok. In the U.S., once someone’s original creative work (an article or story, photograph, illustration, song, etc.) is in “fixed form”, the copyright resides with its creator. Even if you, your company, or your product are the subject of the original creative work, you can’t reuse it without permission.

I am a huge admirer of the work of Jonathan Bailey, creator of the amazing Plagiarism Today website, and have republished his work on this site several times. Each time, instead of using the WordPress reblogging feature, I ask him for permission in advance, and the only changes I make are to fully credit him for his work and thank him for the permission, or to occasionally link to other articles on a similar topic in a footnote.

One of his recent articles explains in detail what plagiarism is, and although he doesn’t address the subject of reblogging in it, the piece spells out how to reuse someone else’s work legally. I think I am going to start including a link to that article in every one of the warning notes I sent to infringing bloggers. As Bailey correctly points out, one of the most common questions asked about plagiarism is, “How much do I have to rewrite to avoid getting in trouble?” The answer is simple: all of it.

You can quote from someone else’s work as part of your original work, but you can’t simply copy other people’s work (even if you link back to the original, as the WordPress reblogging tool does) — especially not if you add your own commentary, or you change portions of what you “reblog”.

Several years ago, someone reblogged a post from my blog on their site — and it was then picked up and substantially edited/revised and published in a magazine, then heavily promoted on Twitter by the magazine editor.  The result was a series of hateful tweets and articles in various blogs and media outlets that trashed my reputation (over mistakes, misquotes, and bad information introduced to the piece by the editor). When I defended myself against one of the hateful posters with a simple note that said “sorry I got linked to that heavily edited piece — that isn’t what the original article said”, it turned into an outright attack that got me flamed and doxed (that is, my personal contact information and address as well as the name of the school my child attended at the time, was published with a call for people to “set me straight” on facts I hadn’t published in the first place).

I admit that experience is the primary reason I hate the reblogging function. But there’s another reason as well. WordPress denies me the option of saying yes — or saying no — by automating the process of stealing my content. The argument is that the “reblogging” function doesn’t actually copy the entire piece. Depending on the length of the original post, it simply copies most of it — with links, SEO, images, and text — then adds a “read more” link at the bottom that brings the reader back to the original site if they click on it.

What this means is that it is possible for a reader to get a wrong impression about my work because they only see part of it. It also means that if I licensed a cartoon, photograph, drawing, song, or other content “piece” for my work, the reblogger is stealing the work of the original creator of that content as well as mine. Not to mention they’re opening me up to litigation for “allowing” the content I licensed to be used far beyond what I paid for.

Protect Yourself from Rebloggers

Posting a notice on your content that you do not consent to reblogging is a good first step. But it isn’t enough.

One thing WordPress does is to send a notice whenever someone uses the “reblogging” function. If you get one of those cheery, “So and so reblogged your post…” notices from WordPress, don’t overlook it. This is what the cheery little notices from WordPress “congratulating” you on having your content stolen look like.  Annoying, aren’t they?

As soon as you get the notice, go to the site, and ask for the infringing content to be removed.  If it isn’t removed, move to have the content removed under the Digital Millennium Copyright Act (DMCA) with a DMCA takedown notice. Here’s the official DMCA tutorial on how to do this.  It’s possible that someone will ignore a DMCA takedown notice.  If they do, and they are based in the US, they can be subject to a variety of civil penalties.

Unfortunately, if someone ignores a DMCA takedown notice, it can get expensive for the copyright holder (you or me) to actually sue them. Yes, copyright infringement comes with triple damages. Yes, we get to set the value of the content that was stolen (or at least ask a judge to agree with our valuation). But we still have to find a lawyer willing to take the case unless the valuation is small enough for small claims court. And that may not be easier.

But it’s easier (and cheaper) to find a lawyer to protect your copyright than to defend yourself against your own infringement suit for the images or content in the stolen content that might belong to someone else. So protect yourself.

Me, I’m off to send DMCA takedown notices to several bloggers who ignored my polite requests.

I'm a Dallas-based marketing consultant and writer, who specializes in helping start-up technology companies grow. I write (books, articles, and blogs) about marketing, technology, and social media. This blog is about all of those -- and the funny ways in which they interesect with everyday life. It's also the place where I publish general articles on topics that interest me -- including commentary about the acting and film communities, since I have both a son and grandson who are performers.
View all posts by debmcalister →
Gallery | This entry was posted in Law, Marketing, Public Relations, Social Media and tagged Copyright, DMCA, law, plagairism, protecting your blog's content from thieves, protecting your copyright, WordPress reblog function. Bookmark the permalink.