Get organized to avoid creative suicide 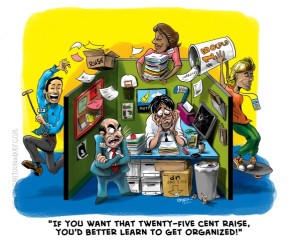 Recently, two of the smartest and most talented people I know called me in a panic.  Both of them are in financial trouble, and both are worried that they’re failures who have hit what should have been the mid-point of their highest-earning years without the savings or resources they will need to survive retirement.  One of them fears losing his home within the next 90 days if he doesn’t turn his struggling freelance business around.

I understand where they’re coming from.  About 20 years ago, I was one of the growing number of creative entrepreneurs who saw so many possibilities that I couldn’t focus on any one path that would give me the financial freedom I needed.  Not earning enough from your talents is a kind of creative suicide — but it’s almost the norm in a society that doesn’t value creativity the way it should.

Like both of my friends, I was a reluctant entrepreneur – I was fired from a job as a senior VP at a large marketing agency when I asked for six weeks of unpaid leave when my granddaughter was born with multiple heart defects.  My boss said, “You can’t take leave now – the biggest trade show of the year is next week, and we’ve got 18 clients going.”  It took me less than 15 minutes to clear out my office (the only time in my career I ever quit without notice or even saying goodbye on the way out the door).

Four months later, I found myself with hundreds of thousands of dollars in unpaid medical bills, running a struggling one-person business.  I had a couple of clients, and no clear vision for what I wanted.  A year after that I was so “successful” that I was working until I fell asleep at my desk, occaionally missing or shorting my own paychecks to pay other people, or covering business expenses out of pocket.

I realized that I was like a lot of creative people I’d met through the American Society of Journalists and Authors, SFWA, PRSA and other organizations:  chronically overworked and abysmally underpaid. It doesn’t matter if they’re writers, marketing or PR experts, social media or SEO consultants, or graphic artists, they fell prey to a time and money squeeze meant there wasn’t enough of either one.  When it happened to me, my health, my marriage, and the quality of my life and my work suffered.

One day, I was talking to W.E. “Peter” Petersen (one of the founders of WordPerfect) and he said, “You know, your company is really good at this – but you try to do too much.  If you’d focus on this one segment of your business, you’d have happier clients.”  This was just before he fired us from one segment of the work we’d been doing for his company, while increasing his budget for the segment he thought we were good at.

A week later, Bob Metcalfe (one of the founders of 3Com, and then publisher of InfoWorld) said, “Look, if you want to charge more, you have to be the ‘go-to’ expert on something.  You need a niche.  I don’t want you trying to do too much for us – just focus on one thing.”  This was as he was rejecting a pitch I was making to take on more work for IDG’s conference business.

When two men I respected and liked both gave me invaluable advice, you’d think I’d have paid attention.  I didn’t.  I kept trying to run a “full-service” agency for another year.  Not because I particularly wanted to, but because I was afraid of losing clients or missing opportunities if I didn’t offer to do anything and everything.

It wasn’t until a third person took me aside and said, “Cut it out and specialize more in one area” that I actually paid attention.  (Of course, that person was my former boss and business partner, Paul Rafferty, and in a friendship that’s spanned over 35 years, I’ve only heard him raise his voice three times – so when he actually yelled at me about this, I listened.  Thank goodness!)

What Paul helped me do next was to pare back a long list of services we offered, clearly define our value proposition, and organize our business and our marketing efforts in a way that allowed us to grow from billings of a few thousand dollars a month (barely enough to cover overhead) to billings over $1.2 million per month, while cutting our core staff requirements.

With a clear, concise, and compelling statement of what we did – and why we were able to do it better than anyone else – and a firm decision to avoid project creep, things got a lot better, very, very quickly.  I don’t know how I lived so many years without realizing that being generous in referring business to other people would help my own business grow, but once I stopped trying to do it all and started saying, “We don’t do that, but I know someone really good who does,” I found out that the clients appreciated our candor – and the specialists I referred them to were equally generous in referring clients to us.

I found a list I made for myself in those formative days.  Maybe it will be useful to anyone else who wants to get organized, and avoid the time & money squeeze.

It took about a year to completely transform my “typical” creative business into a thriving business, and there were some painful moments along the way.  Some people had to be replaced, and I had to make a difficult mental transition from “this is what I’m doing until I find a full-time job” to “this is the business I am building that is going to support me and my family for the long haul.”  But it worked for me, and I suspect it will work for my friends, too.  If they’re ready to hear me explain it to them.

I do think it’s harder now.  With offshore “content producers” in the Philippines, India, and Eastern Europe willing to offer cut-rate writing, design, and development services at prices so low an American creative couldn’t even afford a garret in which to starve, you definitely can’t afford to offer “me too” services.

The hardest part of changing my business was changing my own thinking.  At first, I thought of myself as a creative person who had clients – not a business owner.  It’s odd, but when I became a vice president at a large ad agency for the first time, I had no problem “managing to the bottom line”, and focusing on business goals.  But with my own business, I was reluctant to set an hourly rate that earned the income I needed, and I made some bad hiring decisions out of friendship or loyalty instead of focusing on business needs.  (Hint:  If you find yourself thinking about how to work around an employee’s limitations instead of what you can delegate to that person, you’ve made the wrong hiring decision.  Even if it’s your best friend or a relative — who probably shouldn’t be your employees anyway.)

Last, but not least, I got organized.  I’ve always been self-motivated, but I kept too many details in my head.  When I finally hired both a full-time bookkeeper and a full-time office manager to manage workflow and back-office operations, I was amazed at how much easier my own life became.  Do you need two people for that job today?  Probably not – software has gotten a lot better, but don’t fall prey to the notion that just because you CAN do something yourself that you SHOULD.

I know a software company CEO who spent almost a full day recently creating a video for the company website, and another full day making cold calls to prospective customers his sales department had decided were too small to bother with. (They were right.) The video was pretty good, and he was pretty happy with the results.

And that’s the very last lesson I learned as I transformed my business.  I learned to really focus on doing my job – to get out of the way and let everyone around me do their job.

I'm a Dallas-based marketing consultant and writer, who specializes in helping start-up technology companies grow. I write (books, articles, and blogs) about marketing, technology, and social media. This blog is about all of those -- and the funny ways in which they interesect with everyday life. It's also the place where I publish general articles on topics that interest me -- including commentary about the acting and film communities, since I have both a son and grandson who are performers.
View all posts by debmcalister →
This entry was posted in Uncategorized and tagged creative, Deb McAlister, entreprenurial mistakes, organization, small business. Bookmark the permalink.