Copyright troll Righthaven gets a reprieve

Posted on October 3, 2011 by debmcalister 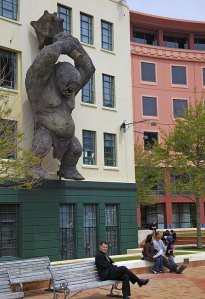 Copyright trolls are like this cave troll outside the Te Papa museum in Wellington, NZ: poised to drop a hammer on the unsuspecting at any moment. I shot this photo in June, 2004, on the street outside Te Papa Tongarewa (the national museum of New Zealand). The troll is by Weta Workshops, and is from The Fellowship of the Ring.

As reported previously, things haven’t been going all that well lately for Righthaven, the notorious copyright troll that has been going after not-for-profit organizations, mom-and-pop bloggers, and individuals who shared content from its newspaper clients — while completely ignoring for-profit “scrapers” like The Drudge Report and many others that aggregated the same content.

Now the company has gotten a reprieve of sorts from a judge in Nevada.  (And the fact that it’s being reported as good news for the company shows just how bad things have been for it.)  That’s because the reprieve was an order to post a bond while the company appeals a judgement against it, instead of being forced to pay the judgement immediately.

The good news for bloggers and social media users is the reason the judge granted the company’s request for a delay in his order to pay the attorney’s fees for one of the defendants in a lawsuit:  Righthaven said if it was forced to come up with the money immediately, it would be forced into bankruptcy.

There’s still no guarantee that the company will survive.  The one thing that’s certain is that law firms continue to file John and Jane Doe lawsuits, and we all need to be vigilant to avoid enriching the copyright troll’s coffers by committing an act of copyright infringement that will actually be upheld in court.

I'm a Dallas-based marketing consultant and writer, who specializes in helping start-up technology companies grow. I write (books, articles, and blogs) about marketing, technology, and social media. This blog is about all of those -- and the funny ways in which they interesect with everyday life. It's also the place where I publish general articles on topics that interest me -- including commentary about the acting and film communities, since I have both a son and grandson who are performers.
View all posts by debmcalister →
This entry was posted in Uncategorized and tagged copyright infringement, copyright troll. Bookmark the permalink.