Summer in the City: What NOT to Do with a Preeteen in New York City (Part 3 – Final Post) 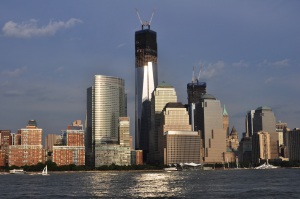 Rebuilding at the World Trade Center site, viewed from the river, July 2012.

Taking an 11-year-old to New York City the week before the 4th of July was an experience that our family will always remember.  That said, if we were in this situation again, we’d do things differently.

To start with, we’d abandon our usual sleep/wake patterns, and schedule a siesta (or at least a nap) in the heat of the afternoon.  We live in Texas, and spend a fair amount of time in California, Arizona, New Mexico and Nevada. So heat doesn’t necessarily bother us in our day-to-day lives.

But a 100° day in Manhattan has problems that a 100° day in Dallas does not. In Dallas, we just walk from the house to the car…crank up the AC…and go to whatever air-conditioned venue we have in mind. Shopping malls, gyms, museums, restaurants, office buildings, libraries — they’re all air-conditioned. Usually to the point where a light sweater or jacket is a useful thing to have on hand.

In Manhattan, they tell me that the subways, taxis, and buses are air-conditioned, and that most buildings are, too. You couldn’t prove it by me.  We got into very few forms of transportation that had working AC that was actually cool.

Then there’s the walking and the waiting in lines. Many of the public buildings — notably the Metropolitan Museum of Art and other museums — were so terribly hot that I actually saw people pass out from the heat INSIDE. I nearly did the same at the Empire State Building after a 2 1/2 hour wait in line.

So, aside from avoiding afternoon heat at all costs and going out for late-night activities, the thing we’d most likely change before going to New York City again is to change the time of year we went. Our 11-year-old had been to a performing arts summer camp in the Catskills, and since we were picking him up there (and watching his end of camp show) on June 27, we decided to take in the fireworks over the harbor and show him American history from the New York perspective over the Fourth of July.

Everyone said, “Oh, the good thing about being in the city on the 4th is that everyone who can get out of the city does, so it’s not nearly as crowded.” I missed something in translation here.  “Not nearly as crowded” for Manhattan translated to multi-hour waits for many attractions (the Statue of Liberty, the Empire State Building, the World Trade Center memorial, many popular restaurants where — even with a reservation — we weren’t seated until an hour or more after our scheduled mealtime).

Wasted Money: Don’t Do What We Did 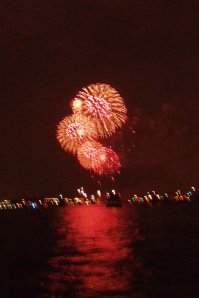 Thanks to a ship’s captain who was pointed in the wrong direction, this is the only part of the July 4 fireworks show I saw. The rapid turns he was making to try to keep it in view made it impossible to stand still on deck — and the blurry photo speaks for itself. Hardly worth the $750 price tag for the cruise that promised a gourmet meal and “spectacular” views — especially when the food was awful besides.

The second thing I’d do differently is to avoid at all costs the company where we bought our (expensive) tickets for the 4th of July Cruise.   Despite calling the aging boat we sailed on a “yacht”, and describing the “3-course meal” in glowing terms on the website, the reality was a far cry from the published advertising. All I can say to anyone thinking about paying $250-600 per person for an evening cruise to see the fireworks in New York City is to be very, very careful what ship you book, and what kind of company you deal with.  Here’s a short list of what was wrong with our cruise:

Other things we wish we hadn’t spent the money on included:

Best Values for Our Money

Before I go on to the final thing I’ll do differently next time I’m in Manhattan with children, I want to list the things we felt were a good value — and the ones that we felt were outrageously overpriced. Others may disagree with my list, but this is my feeling based on the costs and enjoyment factor.

It’s the city itself — great architecture, amazing polyglot culture, and constant hum of activity — that’s the big attraction.  And much of that is free. You get quite a show just walking down the street, and if you rely on locals for advice and tips on the best deals, you may be surprised at how affordable it can be.  I certainly was!

The last thing I’d change about our trip — aside from the weather and the timing — is that I’d change the days of the week we were in the city. We arrived and left on a Thursday, meaning that we had just one weekend in the city.

New York City in the summer is filled with things for families to do on the weekend — and if I were going to spend the same number of days in the city (8), I’d schedule it so that I had two weekends in the city. We just didn’t fit in everything we wanted to do, largely because so many things were scheduled on the weekend (matinée performances, for example).

Here’s a list of the things I wish we’d done with Kameron while we were in the city — but didn’t manage to fit in:

Next time I decide to vacation in New York, I think I’m going to spend more time upstate. The Finger Lakes region where Kameron attended summer camps was gorgeous. For parents day, we couldn’t find a hotel nearby, and wound up staying at one of those Catskills resorts that I’ve read about (and saw in Dirty Dancing), but didn’t think really existed.

The Villa Roma was without a doubt the cheesiest, most stereotypical resort this side of Las Vegas.  We loved it. HUGE rooms, all-inclusive pricing, and enough activities to keep kids and adults busy for weeks at a time.  We didn’t even skim the surface of the activities available there in the two nights we spent there. Kameron was with us the second night, and the half-day before check-out time the day after camp ended.  I think his biggest regret about the trip was not staying at Villa Roma longer, and I understand why.

Family resorts seem to have made a resurgence in recent years.  We’ve even got one in Texas now, a sort of a summer camp for the whole family, with organized, scheduled activities for toddlers to great grandma.  I could be critical of the decor and the uniquely ethnic clientele, but the truth is that it was exactly what it promised to be:  a family oriented resort. And, in the end, isn’t that what we all want in a vacation spot? A place that delivers what it promises?

I'm a Dallas-based marketing consultant and writer, who specializes in helping start-up technology companies grow. I write (books, articles, and blogs) about marketing, technology, and social media. This blog is about all of those -- and the funny ways in which they interesect with everyday life. It's also the place where I publish general articles on topics that interest me -- including commentary about the acting and film communities, since I have both a son and grandson who are performers.
View all posts by debmcalister →
This entry was posted in Family and tagged family travel to NYC, New York City tourism, summer vacation in New York, Villa Roma Resort, Waldorf Astoria Hotel with Kids. Bookmark the permalink.

1 Response to Summer in the City: What NOT to Do with a Preeteen in New York City (Part 3 – Final Post)