Posted on December 6, 2013 by debmcalister

I feel like a terrible person. Here it is, freezing cold, and some of my neighbors are without power, while others have seriously damaged cars and homes. My house is fine, and so is my car, thanks in large part to an excellent tree doctor who trimmed our pecan and oak trees a few weeks back.

But I’ve been thinking a lot about karma and payback. You see, this is what the house directly behind mine looks like this morning — and this is what the street in front of that house looks like. (We live on a corner, and our house faces one way, while the house next door and across an alley faces the other.) 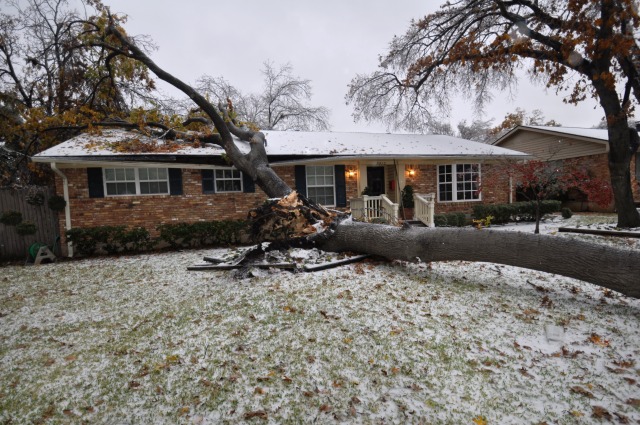 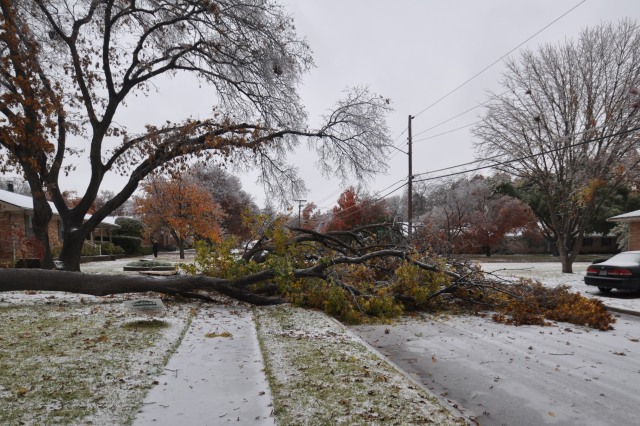 The first time I met the neighbor who owns the house where the oak tree fell, he was standing in my side yard with a chain saw, about to attack one of my beloved pecan trees which he felt had a limb handing too low over the sidewalk. I fenced the side yard, so no one can attack my trees — and I suppose that the neighbor moved on to other people’s yards with his chain saw. (We do hire professional tree trimmers each fall to trim our beautiful old trees so that they are safe during winter storms.)

But it isn’t the karmic effect of a falling tree that has me really thinking about payback this week. It’s that, 22 years ago this week, a neurologist at Children’s Medical Center in Dallas recommended a “do not resuscitate” order for my granddaughter. She wasn’t even a month old at the time.

She was born with three heart defects (tricuspid atresia or TA, an atrial septal defect or ASD, and a ventral septal defect or VSD — basically a missing chamber in her heart and several holes in the heart itself). A blood clot during surgery lodged in the right frontal cortex of her brain causing a massive stroke.

She had “coded” (she stopped breathing and her heart stopped pumping — in effect, dying) three times in the days leading up to the neurologist’s pronouncement. He said, “She’ll never walk, never talk, and will be profoundly retarded. You’re just prolonging suffering if you keep trying to keep her alive.”

Had we taken his advice, and “made her comfortable”, there is no doubt in my mind that she’d have died. It took 14 additional surgical procedures, and years of therapy for our little “heart warrior” to grow up. But we couldn’t see how anyone could give up on a baby, so we asked her cardiologist for advice.

The cardiologist, Dr. Damaris Wright, threw the neurologist (Dr. Roach, and yes, that’s his real name) out of my granddaughter’s room, and told us that miracles happen. “There are no guarantees, but I believe in miracles,” she said, “I don’t think it’s time to give up. I’ll work with you and we’ll do our best to help this beautiful little girl grow up strong. I want to see photos of her when she graduates, and I expect an invitation to her wedding one of these days.”

Here are some photos of my granddaughter over the years. At 22, she’s a new mom, and you’d never know that her life had started out so hard. Aside from a slight limp and a bit of weakness in her right arm, hard work, great therapists and doctors, and her own will to live took the miracle of her survival and turned her into a fearless and independent young woman.

From left, this is my granddaughter after her Fontan — the last of the major heart surgeries, three years after a doctor said she wouldn’t survive. Top right, family photo with her new baby, her dad, and her little brother. (I’m attempting to hide behind my great grandson.) November 2013. Lower right, sweet 16 portrait. 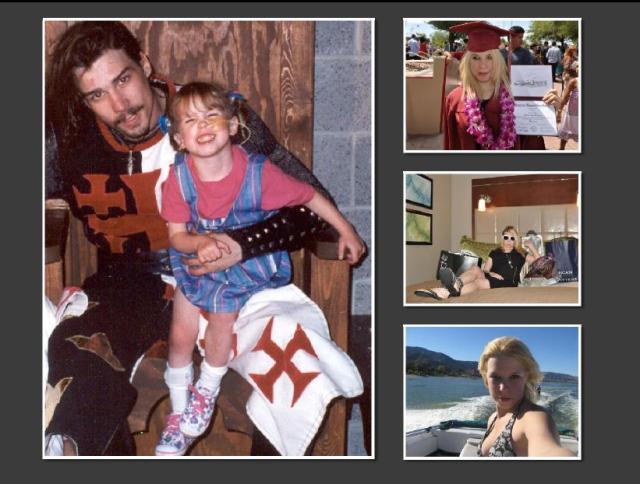 It wasn’t always easy — she was tiny, wearing toddler clothes until second grade, and needed a feeding tube until she decided on her own that she didn’t want it any more because kids at kindergarten teased her about it. From left, with her dad after one of his shows at Medieval Times. Top right, high school graduation. Center right, relaxing after a shopping spree. Lower right, summer in the Mediterranean. Once shy about her surgery scars, she turned down plastic surgery to minimize them when she was 16, announcing that they were part of who she was — so she went out and bought a new bikini, and wore it every day that summer as she enjoyed the sunshine on the island of Majorca.

Here’s where karma comes in. The doctor who predicted so many dire things for my granddaughter all those years ago is no longer practicing medicine. That’s because he’s in a long-term care facility, in a persistent vegetative state, unable to walk, talk, or feed himself after an aneurysm. He’s been that way for years, and may live in that condition another three decades.

The cardiologist? She’s enjoying retirement with her husband, volunteering a few weeks every year for Doctors Without Borders, and exploring the country on a Harley.  My granddaughter is discovering the exhaustion and joys that come with being the mother of a 4-month old boy.

I’ve been thinking about my own karmic debts to the universe. I know there are people I wasn’t kind to, and I know that my behavior isn’t always what it should be. It’s days like this that remind me that I need to be a better person. I don’t want an oak tree falling on me — and I certainly don’t want to wind up like that neurologist!

I'm a Dallas-based marketing consultant and writer, who specializes in helping start-up technology companies grow. I write (books, articles, and blogs) about marketing, technology, and social media. This blog is about all of those -- and the funny ways in which they interesect with everyday life. It's also the place where I publish general articles on topics that interest me -- including commentary about the acting and film communities, since I have both a son and grandson who are performers.
View all posts by debmcalister →
This entry was posted in Family and tagged family, Fontan surgery, karma, tricuspid atresia. Bookmark the permalink.