One of my New Zealand friends, photographer Desmond Downs, recently posted this video on YouTube. Anyone who’s hiked the Tongariro trail would be as appalled as I am at the actions of the young mother who took that walk with a baby strapped to her chest. It just isn’t safe.

Screen capture from Desmond Down’s video of an irresponsible mother hiking a mountain pass with a small baby in a carrier. Note that this isn’t one of the heavy-duty baby carriers that offer some (small) protection for the child — it’s just a sling that leaves the child’s head and face exposed to the wind, flying debris and other dangers.

This mom could fall at any moment. About half the people who complete the walk slip and fall at least once on the trek  because the trails are so steep and slippery, with “schist rock” (crumbling shale) underfoot so that the footing is treacherous no matter how fit you are. If mom falls, so does baby.

Even if mom simply sits down (hard) and slides down the trail, or dad and the other nearby adults catch her as she falls, the baby could still be shaken badly enough to cause internal injuries. And if Mom falls forward — which I know from personal experience is easy to do on the steep portions of this trail — she could crush the child before anyone has a chance to reach her.

And what about the jostling and bouncing that comes along with going up and down a series of mountainsides? Didn’t this mom ever hear of “shaken baby syndrome”? What part of, “It’s dangerous to shake your baby around — you could cause brain damage” did she miss? 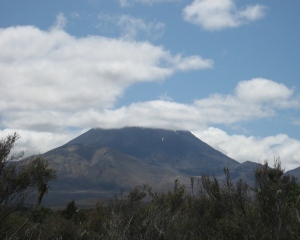 Mt. Ngauruhoe was the stand-in for Mt. Doom in the Lord of the Rings movies. It’s a beautiful, wild and desolate place. But it’s no place for babies or small children. ©2005, Desmond Downs; all rights reserved.

Then there’s the simple fact that the weather along the Tongariro Crossing is notoriously unpredictable. It’s midsummer in New Zealand, but that won’t stop the weather from dropping suddenly from the 60’s into the 20’s.

The average daily wind speed on the mountain during December is about 9 km/h, that’s the equivalent to about 6 mph, or 5 knots. I was on the mountain in 2009 when the wind suddenly rose to 37 km/h (about 23 miles per hour or 20 knots), and stayed that way for hours. When winds reach 20 miles per hour on the Tongariro trail, the air is filled with flying debris. Sharp little pieces of shale. Dirt. Branches. Trash left behind by careless hikers. It gets harder to stay on your feet, and there is no place to shelter on the mountainside.

People die when the winds get high — on Tongariro and elsewhere. For example, in New Jersey, three people were killed by falling limbs and debris when winds gusted to 20-30 miles per hour. If you haven’t experienced the wild beauty of the Tongariro Crossing for yourself, you’ll have to take my word for it that when wind speeds pick up, the mountainside is no place to be for an adult, and certainly not for a baby protected only by its mother’s arms and whatever cover she can fashion. In short, this woman is irresponsible.

Trying to be “Supermom” Endangers Kids

Is the paint being used in this photo non-toxic? Is the room ventilated? Is this mom just doing it herself — or is she taking an infant that small to work with her? I have no clue — and the photographer who posted the photo on Flickr doesn’t give me a hint. But, seriously, wouldn’t it be better to do the home improvement with baby safely at grandma’s house or down the block with a reliable babysitter?

Once upon a time, there was no stigma attached to hiring a babysitter to watch the kids while adults enjoyed adult pastimes. My parents didn’t go out often, but when they did, I was left with an aunt, cousin, or teenage babysitter.

When my children were small and my husband was in the Air Force, there was a 24-hour daycare on base, and there was one near us in Dallas after I left the world of the military wife behind. My grandkids were raised in Dallas, Austin, and Las Vegas, all places with excellent 24-hour “drop-in” day care services, registered babysitting services, and reliable, responsible babysitters.

Somehow, though, a pernicious idea has grown up that it’s selfish to hire child care when you need it. Take it from grandma, it isn’t. I’m not talking about a Victorian idea where servants raise the children while mom and dad visit them occasionally.

I’m talking about putting the kid’s safety first. Please, no attitude about how your children are only safe when they’re with you, or how you can’t afford quality child care. That simply isn’t true if you bother to screen your caregivers — or rely on your own friends, a church “mom’s day out” program, or any of the other affordable options available in nearly every city or mid-sized town. And no matter how good you are at being a parent, if you are trying to do too many things at once, you’re not nearly as good at being a parent as you could be if you were actually devoting all of your attention to your child.

People take their kids jogging with them. They attach wheeled carts or baby seats to their racing bikes. They strap tiny infants and older kids alike to their chest or back while they do nearly everything.

They call it “togetherness” and “quality time” or even “exposing the kids to fitness early”. I call it dangerous and silly. Just because you want to be outdoors running, hiking or riding a bike when it’s 30 degrees (or 105 degrees) doesn’t mean that’s the best option for small children.

I’ve seen mothers and fathers do amazingly stupid things in the name of being “fit”.  Here are a few of the things I’ve seen personally that strike me as seriously dangerous for kids:

Stop it! Don’t endanger your child in the name of losing your baby weight or staying fit. Most gyms have free day care centers — use them. Most churches have “mom’s day out” programs (available to parents of both genders) where you can trade a few hours of watching kids for dropping your own kids off while you’re at the gym. Create a network of other moms who trade child care with each other.  It’s easy, free, fun, and has the added benefit of socializing your kids at an early age.

Texting While Parenting is Dangerous, Too 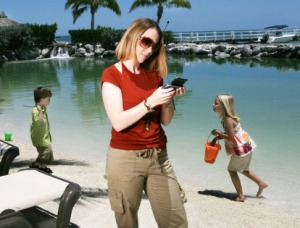 The Wall Street Journal says non-fatal accidents involving toddlers are up 12% in the years since smartphones became popular, and many doctors blame parents who are distracted by their cell phones.

It may sound like I’m picking on parents who exercise. But sedentary activities can be dangerous, too.  How many times have you seen parents so busy multi-tasking that they are barely aware of what their children are doing until one of them starts to scream or cry?

Usually, the sedentary activities that are the most dangerous involve parents who are paying more attention to their cell phones than their kids. The problem of parents on cell phones ignoring their kids is so widespread that it has its own Tumblr, where you can post photos of the parents you see you are endangering their children while interacting with their phones.

The Wall Street Journal article, the Perils of Texting While Parenting reported that non-fatal injuries to young children are rising at about 12% per year despite improved product safety — and the experts quoted in the article blame parents distracted by smartphones.

Lately I’ve seen an increasing number of kids standing on folding high chairs, leaning dangerously out of shopping carts to reach stacks of items on store shelves that appear poised to bury them, pulling at tablecloths, hiding under tables directly underneath hot food or liquids, and stuffing all sorts of things into their mouths while their mothers were oblivious to their offspring’s actions while focused on cell phones or iPads. I was in the ER not long ago with a 12-year-old who sprained his ankle and saw the horrific aftermath of this kind of distracted parenting.

A family was enjoying brunch at a restaurant. Mom was on her cell phone sending photos to an absent family member when her son put a balloon animal in his mouth. It popped, and he swallowed a piece of it and passed out before anyone realized what had happened. Based on the anguished wailing I overheard, it seems the mom thought the look on his face was funny, and was taking a photo when she realized he wasn’t just startled by the popping balloon, but was actually in trouble and turning blue.

A few minutes of inattention means a lifetime of anguish for this family who have just become part of the community no one wants to join: the parents of children with serious disabilities requiring 24-hour, lifetime care.

And that’s the point. Adults who are trying to do to many things usually aren’t doing anything very well. Supermom and superdad are myths, and so is the idea of multi-tasking if one of the tasks involves supervising small children or infants.

So do yourself a favor — hire a babysitter for a few hours, and enjoy your “adult time”.  Listen to grandma: your kids will be safer, and you’ll enjoy them more after a short break.

I'm a Dallas-based marketing consultant and writer, who specializes in helping start-up technology companies grow. I write (books, articles, and blogs) about marketing, technology, and social media. This blog is about all of those -- and the funny ways in which they interesect with everyday life. It's also the place where I publish general articles on topics that interest me -- including commentary about the acting and film communities, since I have both a son and grandson who are performers.
View all posts by debmcalister →
This entry was posted in Family and tagged bad parenting, distracted parents, grandma's advice for parents, moms endangering children, texting while parenting, unsafe parenting. Bookmark the permalink.

3 Responses to Hire a Babysitter! Grandma’s Advice for Young Parents