A Big Day for a 12-Year-Old: a TV Pilot, Science Fair & Magnet School!

Posted on February 3, 2014 by debmcalister

Today’s a big day for our resident 12-year-old. First, and foremost in his thoughts, it’s the day of the last elementary school regional science fair he’ll ever get to enter. He has put in well over 120 hours on his project for the year, and he is convinced this will be the year he takes one of the top prizes at the North Dallas Regional Science Fair.

Projects get dropped off at 4 p.m. this afternoon, and the judge’s results will be announced tomorrow. His project display is bigger than he is — it’s 6′ tall, and he’s just 4’8″ tall. He considered using the full 9′ height allowed by the rules, but when informed he had to carry it himself (I use a cane or walker when my arthritis is bad, so I’m no help) he decided to go with a more manageable size. Here’s what it looks like — please keep your fingers crossed and thing good thoughts for him. He really has worked hard on it! 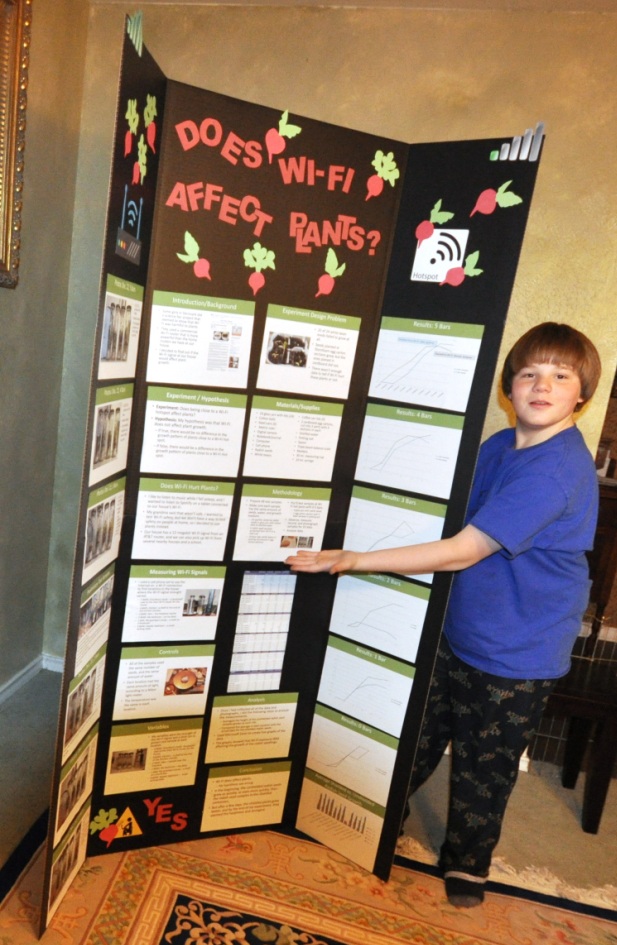 For the regional science fair (scheduled for February 3, 2014 in our area), our 12-year-old took the judges’ comments from his school fair to heart, and completely revamped his project display. It took him two full days to revise and rework his display. This 6′ tall display (the rules allow a 9′ display, but he can’t carry one that big by himself — he’s only 4’8″ tall) is the result. He is sure it is better organized and easier to read than the original, and he added an explanation for one of his data tables which shows an anomaly in the graph.

It’s a big day for another reason. He applied for the Arts and Technology Magnet Junior High School in our school district, Richardson West Junior High, and was accepted this morning into both the visual arts and performing arts program. As with most magnet schools, there are far more applicants and spaces, and he was worried that a slight drop in his math grade (which took him off the “A” honor roll for the first time in several years) this six weeks would ruin his chances. Luckily, it didn’t, and he is thrilled to be headed to the school he most wanted to attend.

Last, but hardly least, he got the news first thing this morning that he’s been cast in a TV pilot where he’ll play a recurring character. This will be his second TV pilot — the first wasn’t picked up — and he’s very excited. I can’t give details yet, as it’s still under wraps and the contract is still being reviewed, but it’s an exciting step.

I do feel a bit sorry for his teachers today. I do not think his mind is going to be on classwork today! I think we are going to have to celebrate with dinner out tonight. Regardless of what happens at the regional science fair, or with the TV pilot, he’s already a winner in my book just for putting in the hard work it takes to get where he is.

Being a child actor isn’t easy — especially at 12. He’s no longer the cute little kid who gets cast just for being a cute little kid, and he doesn’t look old enough for most teen parts. So there is a lot of rejection right now. I’m proud of him for pursuing his dreams with tons of hard work — private lessons, classes, workshops, practice in front of a mirror — even when it means not getting to spend every weekend with friends, or just sleeping in.

Today I feel very lucky to have my grandson in my life. What a gift this child has been!

Update, February 5, 2014: The wait is over. Kameron took second place in the 6th Grade Life Science Division at the North Dallas Regional Science Fair.  The project that took first place in his division also took the fair’s grand prize. Two 11-year-old girls came up with a new way to sequence plant DNA using household chemicals that drastically reduce the cost of the test — some serious science involved in that project! Amazingly talented kids out there — we had great fun at the fair and looking at all the great projects. 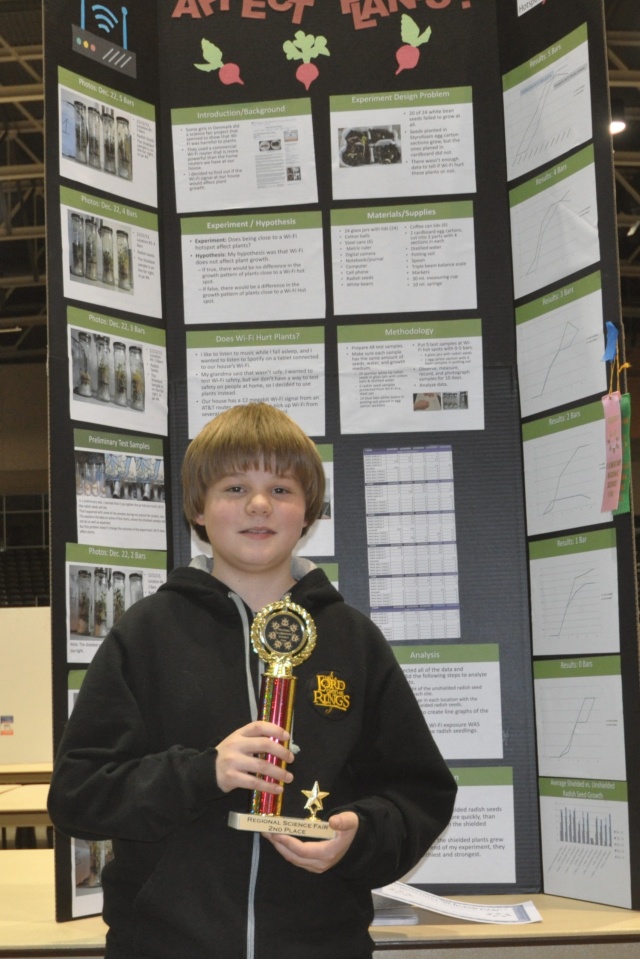 I'm a Dallas-based marketing consultant and writer, who specializes in helping start-up technology companies grow. I write (books, articles, and blogs) about marketing, technology, and social media. This blog is about all of those -- and the funny ways in which they interesect with everyday life. It's also the place where I publish general articles on topics that interest me -- including commentary about the acting and film communities, since I have both a son and grandson who are performers.
View all posts by debmcalister →
Gallery | This entry was posted in Acting & Circus, Family and tagged child actor, grandkids, magnet school applications, science fair. Bookmark the permalink.