Planning Ahead: Bastille on Bishop July 14!

If you’ve never been to the annual Bastille on Bishop festival in Dallas’s Oak Cliff neighborhood, plan now to make it to the 5th annual event. It will take place on July 14, from 6-10 p.m.

Go Oak Cliff, one of the most active community groups in North Texas, puts on one heck of a festival with street performers (like my grandson Kameron Badgers, who’ll be back for the third straight year), wine tasting, and amazing food.  Of course, the restaurants, shops and galleries that make the Bishop Arts District one of the best shopping destinations in town will be open late as well.

Kameron is just one of the many talented performers who’ll be working for tips along the 3-block festival area. And there will be musicians playing on the main stage, and in the areas set aside for dancing. It’s a safe, fun outing for the whole family with something for everyone of almost any age.

Amy Wallace Cowan, the marketing powerhouse behind much of Go Oak Cliff’s success, has an interesting story about just why there is a Bastille Day celebration (not to mention a Mardi Gras parade) in North Texas. I thought I knew my Dallas history pretty well, but this had always escaped me until I read the “About Bastille on Bishop” page on the festival’s website.

“Ever wonder where the Reunion Tower got its name? You’ll have to head back to 1855, when Dallas was in existence for only 14 years, to find a group of 200 mostly French settlers led by Victor Considerant who made their way from Houston by ox cart to set up a ‘Utopian Community’ based on the ideas of Charles Fourier in what is now North Oak Cliff.

“Considerant had fled the armies of Napolean III after he’d staged a series of protests against the Roman Expansion. The community brought Dallas its first piano and beer brewery, and though it would collapse within a few years, many of the settlers who disbanded would later move to the city of Dallas and formed much of the cultural endeavors that made the young city stand out from other landlocked communities.

“One of the La Reunion inhabitants, François Jean Cantagrel, would later return to France and become the Vice Mayor of Paris. Other notables included former Conductor of the Paris Odeon, Allyre Bureau.

“The caliber of individuals that set out to call our side of the river home was incredible, and imagining these highly cultured people setting down stakes in North Oak Cliff is definitely worthy of celebration!

“The Bastille on Bishop Festival honors our city’s rich French history by promoting the art,culture, history, and spirit of a nation who helped form our early identity.” (The italicized text is from the Bastille on Bishop website, and is “fair use” with no copyright claim on my part — visit the festival’s website for great pictures, tickets, and all the details on the festival!)

This crowd shot of the 2012 Bastille on Bishop festival was taken by Dallas photographer Alex Butterfield. It’s an event where the whole family can have a great time. 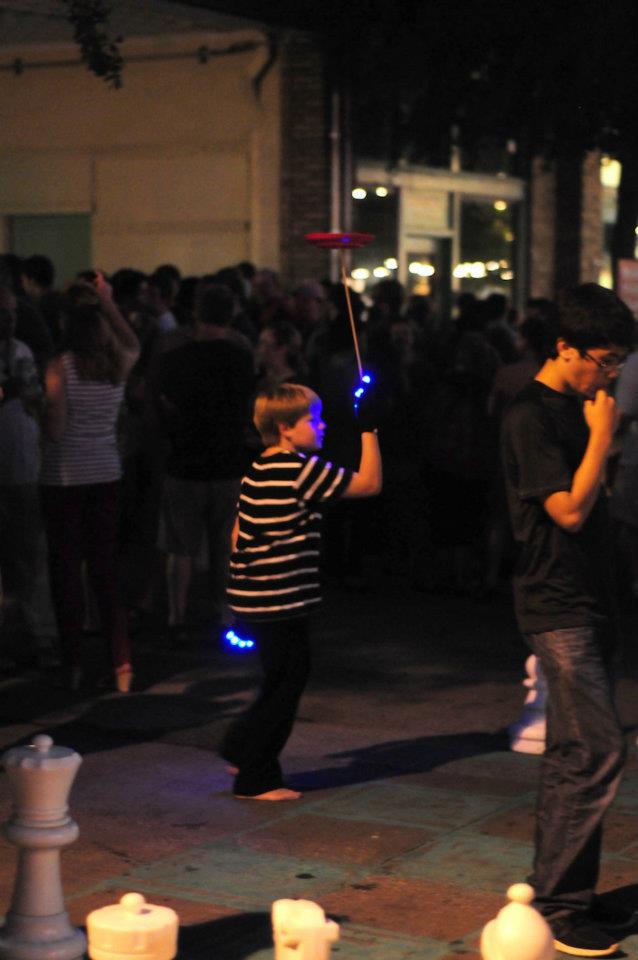 My grandson, Kameron Badgers, is a juggler, clown and circus performer (and he is a working actor, too). This will be his third year at Bastille on Bishop — he’ll be performing his “juggling in the dark” routine with LED-lighted props after dark, and showing his skill on the rola-bola and “regular” juggling until sunset.

Photo credits: The photo of the crowd and the giant chess set was taken by photographer Alex Butterfield and offered on Flicke under a Creative Commons license.  The photo of my grandson, Kameron Badgers, spinning a plate was taken by a photographer for Go Oak Cliff, the sponsors of the Bastille on Bishop festival, and they kindly granted us the right to use it in stories about Kameron’s appearance at the festival. Copypright on both photographs remains with the original owners.

I'm a Dallas-based marketing consultant and writer, who specializes in helping start-up technology companies grow. I write (books, articles, and blogs) about marketing, technology, and social media. This blog is about all of those -- and the funny ways in which they interesect with everyday life. It's also the place where I publish general articles on topics that interest me -- including commentary about the acting and film communities, since I have both a son and grandson who are performers.
View all posts by debmcalister →
This entry was posted in Acting & Circus, Family and tagged Bastille on Bishop, Bastille on Bishop 2014, Bishop Arts District, Dallas circus performers, Dallas juggler Kameron Badgers, Go Oak Cliff, Kameron Badgers. Bookmark the permalink.

1 Response to Planning Ahead: Bastille on Bishop July 14!