Did you ever Google yourself – only to find that you didn’t like what turned up?

Just before I took off on an around the world trip a few years ago, I sent an email to an acquaintance in town. It was private correspondence, not intended for anyone else but the recipient. But he republished nearly all of it – leaving out only the attachment, which proved to be critical – on an electronic newsletter he publishes.

I was “offline” – no email, no phone, no Internet – for several blissful months. And when I got back, I found out that I’d been pulled into a flame war between two companies, one of them run by a pugnacious man who took it on himself to accuse me of acting on behalf of the other company to make a claim of plagarism.  I didn’t do any such thing, but by the time I got back postings and comments were plastered all over the Web claiming that I hadn’t responded to requests for “proof”, and suggesting that I was a nosey nobody who had no business even talking about my betters.

Most of the barbs aimed at me by the gentleman who seems to have taken umbrage when I said I’d never heard of him (I hadn’t) have washed off the first couple of Google pages by now, but one is still hanging around near the top.

I’m lucky, though. At least all I’m being accused of is being too stupid to recognize the name of a guy most people haven’t heard of either.  It could be a lot worse.

The first post on this blog  detailed the story of a man I met here in Dallas who Googled himself to find even worse news: an article that began, “Michael Unusuallastname is a convicted child molester…” While he works on creating a positive online personal brand for himself, I suggested a very old-fashioned cure for Michael’s problem – begging the editor to change the story to use the convicted child molester’s middle initial, so that people could tell them apart.

Once upon a time, between 1998 and 2008, Googling yourself was a kind of guilty pleasure. They called it “Vanity Surfing” or “ego searching”. But these days, it’s pretty much a requirement for anyone who needs a job, a credit card, or a potential mate.

That’s because if you don’t check out your own online reputation, it’s a dead certainty that other people will. And if you don’t know what’s out there, you don’t have a prayer of correcting a problem that can keep you from getting a job – or convince your future in-laws to write a pre-nup that will leave your head spinning.

Google estimates that several million of us Google ourselves every day. The trouble is, as Joe Kraus, Google’s director of product management, told Time magazine back in 2009, “If your name happens to be Brian Jones, and you aren’t the deceased Rolling Stones guitarist, then you don’t exist.” At least not as far as the search engines can tell. 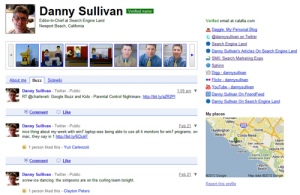 But Google now offers a product specifically for all the Brian Joneses out there – and the rest of us who don’t like what the search engines turn up. It’s called a Google Profile. Here’s what Google has to say about the free service:

Your profile is the way you present yourself on Google products and across the web. With your profile, you can manage the information–such as your bio, contact details, and links to other sites about you or created by you–that people see.

At a minimum, your first name, last name, and photo will be public on the Internet. You can then provide a variety of additional information about yourself in your profile. You can also enable people to contact you without displaying your contact information.

In the two years that Google Profiles have been available, I haven’t actually seen one crop up in search engine results for any name I’ve entered into the search engine. The whole point of the profiles is that a small Google profile would show up at the bottom of the search engine’s first page for those who set them up, giving the masses a chance to easily control what was said about them online.

Barry Schwartz, founder of web design firm RustyBrick commented soon after the Google Profile launched that his Google Profile didn’t show up in search engine results. Google told him then that the profile might have gotten caught up in its celebrity filter.

I don’t know about that, but Schwartz commented on the Google Profile redesign last month, and didn’t mention any problems with his profile. So I Googled him to see what the profile looked like in the search engine results – and no profile showed up. I found links to his Twitter page and several blog posts he’d published, but no Google profile showed up on my screen when I entered “Barry Schwartz” into the search engine.

OK, so perhaps he is a celebrity, and his profile is still caught in the celebrity filter. So I tried a number of other names – including Brian Jones, figuring one of the invisible Brian Joneses out there would have created a profile after Mr. Kraus so helpfully suggested it in that Time article. Last, but not least, I tried Joe Kraus.  Nothing.  Nada.  Zilch.

The only way I can find a Google profile on anyone is to enter the search term “First Name Last Name Google Profile” — which kind of defeats the purpose, I think.  Or am I missing something?

I'm a Dallas-based marketing consultant and writer, who specializes in helping start-up technology companies grow. I write (books, articles, and blogs) about marketing, technology, and social media. This blog is about all of those -- and the funny ways in which they interesect with everyday life. It's also the place where I publish general articles on topics that interest me -- including commentary about the acting and film communities, since I have both a son and grandson who are performers.
View all posts by debmcalister →
This entry was posted in Uncategorized and tagged Deb McAlister, Google, Google profiles, googlewashing, SEO. Bookmark the permalink.

1 Response to Go Google Yourself!