Live in the U.S.? DON’T Tie a Yellow Ribbon on Your Dog’s Leash

Posted on January 5, 2014 by debmcalister

Sounds like a good idea — but it isn’t. It’s being used by lawsuit-happy attorneys as an admission that the owner knows they have a dangerous dog.

One of the memes making the rounds on Facebook urges dog owners of shy or skittish dogs to tie a yellow ribbon onto the dog’s leash. The idea is to alert other people that the dog is afraid, so they will give it space. But that isn’t the effect it’s having in many parts of the U.S.

American juries (urged on by plaintiff’s attorneys) are using the yellow ribbon the same way they’ve been using the “Beware of Dog” signs for years: as an admission that the dog owner knows he has a dangerous dog. And your dog could pay with its life if it’s labelled as a “known dangerous dog”. The dog doesn’t even have to bite anyone. In Texas and a number of other states, it’s legal to shoot a dog if someone is “reasonably” afraid of it.

People already use laws like that as an excuse to shoot some breeds on sight — but a police officer in one Texas town shot a Lhasa Apso when serving a warrant for unpaid traffic tickets at a house that had a “Beware of dog” sign on the fence. He heard a dog barking, and simply shot towards the sound of the bark since the owner had labelled their own dog as dangerous by posting the “Beware of dog” sign.

The DogKnobit blog recently carried a post on this subject that perfectly sums up my thoughts. “On one hand, I think we presume too much ‘dog savviness’ on the part of the public. I’ve been a dog fancier for thirty years, but if I’d never seen this poster on Facebook, I wouldn’t have known the significance of a yellow ribbon on a dog leash. Because I am a dog fancier, however, I also know there are better ways to deal with the situations listed on this poster than using a ribbon to ask for ‘space.’

“Responsible dog owners have control over the environment  to which their dogs are exposed, as well as the degree of ‘saturation’ in that setting. If a dog has health issues that require minimal contact with other dogs,  should the dog even be in such an environment?  And is it me, but if a dog doesn’t do well with other dogs, should he even be around them until he’s become trustworthy in a controlled setting? And finally, isn’t it just plain common sense and courtesy to keep one’s dog from getting in another dog’s face?”

I love my dogs, and I love taking them places. Three of my four dogs are friendly, get along well with other dogs, and adore children. The one that doesn’t is the smallest and cutest of the bunch. No one seeing her would assume she could bite. She’s so adorable that children (and adults) feel the need to rush towards her to “cuddle”. A stranger rushing toward her scares her, and she instantly stiffens and begins to growl low in her throat, but that doesn’t deter some of the would-be cuddlers. (Idiots. If a dog growls, back off, no matter how little and cute the dog is.) So, while I adore Suchi, she doesn’t accompany us to public events. 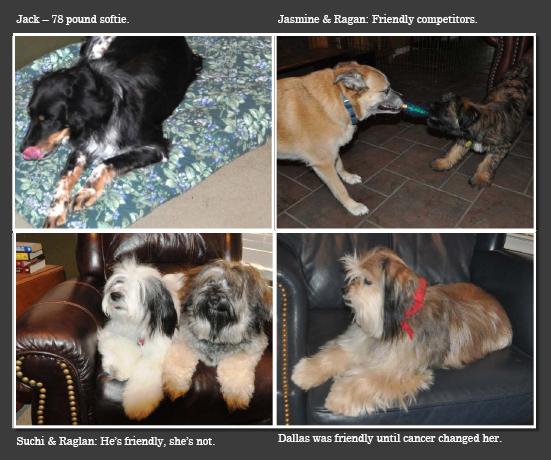 My largest dog — Jack — is the friendliest. Three of my four dogs have earned “Canine Good Citizenship” awards for being well-behaved around people, in crowds, and small children: Jack, Jasmine, and Raglan. The fourth, Suchi, is a little fluff-ball that everybody wants to cuddle. However, Suchi (a black and white powder-puff who barely weighs 18 pounds) is an alpha female who doesn’t like strangers, and is very protective of her territory. So we don’t take Suchi out in public much. Our last alpha female — Dallas — was a mixed breed Tibetan Terrier/Lhasa Apso who was great until the pain from cancer made her grumpy. It’s my job as a responsible dog owner not to put my dogs in a place where they feel threatened.

Correction to Yellow Ribbon Meme from Down Under

It seems that the Yellow Ribbon meme being shared on Facebook has lost something in translation as it made its way from Australia (where it originated) to the States.  This correction arrived as a comment to my blog post from Pat Robards, of the K9 Events group in Australia, where the yellow ribbon idea originated. It’s too important to leave in the “comments” section, so I have added it (exactly as Pat sent it) to the blog post:

“I don’t think you guys are quite correct about the real facts of the yellow ribbon, it was never meant for the public originally  although  used by veterinary  behaviourists and certain veterinary clinics if the dog has a broken leg ‘please don’t let your dog run up to it and play’.

“The idea was brought back to Australia from the USA originally for our dog  for our dog clubs in the year 2000, 14 years ago now. You can read our ABOUT section here http://www.yellowdog-australia.k9events.com/about.html

“This  idea was ‘borrowed’ by Sweden then they founded Gulahund June 27th 2012 r e-packaging it for  pet dogs . Folk it seems overseas are muzzling dogs putting a yellow ribbon on them and it is such a shame  to see something that did no harm I helping dogs cope be given a bad name either by the reporting or those who use it

“We are responsible dog owners like yourself, the yellow ribbon has  nothing to do with shelving responsibility, it is asking the idiots out there to control their animals so they cannot get into our dogs face or space. The same goes for people who think it their right to pat any dog  they see, why it started in the first place for my shy dog!

“Why did you use this old poster which features a  pit-bull,  hoping it wasn’t to give your story more reality, if so it  lacking empathy towards this breed  so I’m not impressed with your article that is not factual. 😦

I’m sorry I misunderstood what I saw on Facebook — but I fear others did, too. I’m very glad my new Australian friend took time to set me straight, and allowed me to reproduce his comment on my blog.

As for pit bulls, my favorite “grand-dog” is a red-nose named Tinkerbell, who lives up to her name. She’s the sweetest, friendliest, most lovable dog ever, because she’s been well-treated and well-trained all her life. The dogs who make headlines belong to bad owners, in my experience, while the great dogs like my friend Melissa’s Tex, or my son’s “Tink”, don’t make the news. I reproduced the Internet meme that was shared on my timeline by several friends without even noticing that the photo was of a pit bull, and meant no disrespect to the breed or responsible pit bull owners.

Be Wary of “Beware of Dog” Signs?

Like the yellow ribbon question, the use of “Beware of Dog” signs can have unintended consequences.  Juries have said that they awarded higher damages in cases where owners had “beware of dog signs” — and courts have ruled that the signs aren’t enough to establish that a dog is dangerous. But posting such a sign is more than enough to give a service person, meter reader, or delivery driver the right to refuse to come onto your property.

It’s also enough to give first responders the right to shoot your dog before they enter your property in an emergency. And if your dog does bite someone — including the annoying neighborhood kid who throws things over the fence or pokes his hand through the fence — it could give the kid’s parents more than enough ammunition to have the dog put down even if the dog doesn’t break the skin. (A bruise or red mark may be more than enough.)

There’s a kid in our neighborhood like that. It was enough to get me to replace the 4′ chain-link fence that had been around my back yard since 1959 with an 8′ solid wood privacy fence that encloses three sides of my 3/4 acre lot. (His parents have already sued two people for injuries to their precious little snowflake — an obnoxious kid who knows that mommy and daddy will believe whatever fairytale he spins for them instead of listening to the litany of complaints about his bad behavior. I don’t intend to be their third victim.)

The fact is that laws about dogs vary from city to city and state to state. In most places, just posting a “Beware of Dog” sign or putting a yellow ribbon on a dog’s leash isn’t enough by itself to establish that the owner knew a dog was dangerous. On the other hand, both have been used to justify draconian actions taken against the dog and the dog owner — so why take a chance?

Me, I’m going to keep doing what I think is best as a responsible dog owner. For me that means:

It will never make sense to me that I live in a state where gun ownership is unrestricted, but dog ownership is heavily regulated, or that insurance companies don’t charge a premium to homeowners who have assault weapons — they can’t even ask about guns — but do charge premiums to homeowners with dogs.  But the law is the law, even if it is an ass (as Charles Dickens’s character Mr. Bumble said so eloquently).  So I comply with it — and vote for those who oppose breed-specific legislation and further erosion of my dog’s right to be safe on my property.

I'm a Dallas-based marketing consultant and writer, who specializes in helping start-up technology companies grow. I write (books, articles, and blogs) about marketing, technology, and social media. This blog is about all of those -- and the funny ways in which they interesect with everyday life. It's also the place where I publish general articles on topics that interest me -- including commentary about the acting and film communities, since I have both a son and grandson who are performers.
View all posts by debmcalister →
This entry was posted in Family, Law and tagged beware of dog signs, dog bites, dog law, dog laws, dog ownership, yellow ribbon on dog leash. Bookmark the permalink.

81 Responses to Live in the U.S.? DON’T Tie a Yellow Ribbon on Your Dog’s Leash