What the Dylan Farrow Story Says About Me 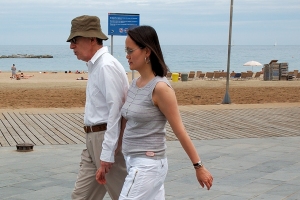 Woody Allen and his wife Soon-Yi (Previn) Allen in Barcelona.

In the mid-1990’s, I was in New York with a technology client who is also a musician. One evening during a week-long business trip, he headed off to a small club in Greenwich Village where he sat in on a session with his long-time friend, Woody Allen.  I sat with his wife and some other people from the company, and we were joined by Allen’s much younger wife, Soon-Yi (Previn).  She was nice, smart, and interesting.

At the time, I knew nothing of her story — I’ve never been a gossip magazine reader — but on the cab ride back uptown with some co-workers, I got an earful. One of the women was talking about how shameful it was that Allen had married his former step-daughter. And a man in the cab spoke up forcefully. “She’s not his daughter or his step-daughter. His former girlfriend adopted her. He never adopted her, and he isn’t her father.”

As was usual in the days when earning a living was important to me, I kept my mouth shut. I’ve always hated it when those who aren’t adopted talk about adoptees as not really being related to their adoptive families. OK, the truth is, I hate it when people who are not adopted talk about adoption in almost any sense. It’s like male politicians talking about “reasonable” restrictions on a woman’s right to choose what happens to her body, and what medical decisions she makes about a pregnancy. To me, both are outrageous because the person doing the talking can’t possibly relate to the situation.

Fast forward to 2014, when another of Mia Farrow’s adopted daughters made the headlines with her open letter about sexual abuse charges levelled at Allen when she was a child. I wan’t there when Dylan lost her innocence and suffered the horrific things that still haunt her. So I don’t know who did what, or what portion of the resulting courtroom drama was caused by the bitter custody battle underway at the time, and what portion was due to a prosecutor’s reluctance to put a fragile 7-year-old on the witness stand. Nor do I know what experts were paid to tell what story, or what really happened.

But just as when Allen married his much-younger wife (who happened to be his former step-daughter), the reaction from people made me angry. The comments sections of every website that carried the story — and what website didn’t? — were filled with more comments about the fact that both Soon-Yi and Dylan were adopted, as if that somehow mitigated the situation or made things “better”.

I’m 60 years old, and those comments brought up buried feelings from when I was 5 and two of my cousins informed me that they didn’t have to include me in their activities because I wasn’t really related to them — I was just adopted. And memories from the time when I was getting ready to go to college and was told that the family trust set up to pay for such things didn’t include me becuase I wasn’t really a descendant of the man who set it up — I was just adopted.

What the Dylan Farrow Story Says About Me

The media furor over Dylan Farrow’s open letter to Woody Allen really has pretty much died down by now. I waited for a long time before posting this, hoping that the anger and turmoil inside would fade.  But it hasn’t.

On one level, what happened to Dylan Farrow has nothing to do with me — I was not sexually abused as a child, I’m not famous, and I was never the subject of a custody hearing.  But the reaction to it says quite a bit about the way adopted adults like me are viewed by the general public.

When I decided to pay a private investigator to get the facts about my birth family for me, my husband of less than a year was appalled.  He said he’d married Deb — and suddenly I wanted to become “Michelle Avery” (the name on my original birth certificate).

I didn’t want to become someone else; I was simply ecstatic to learn more about who I had always been. But my husband didn’t understand why it mattered, and his attitude nearly wrecked our marriage. It still hurts 15 years later.

My children were equally unsupportive. They thought I was being disloyal to their grandmother, someone who doted on them and thought they were absolutely perfect.

The often hateful comments about which kids were “really” Allen’s and Farrow’s, and which ones were “just” adopted brought it all to the surface again. You’d think I’d be over it now that I’m a great grandmother. But I’m not. So if you know an adopted person, and the story of Dylan Farrow’s abuse hit them harder than you think it should, please try to put yourself in our place.

Because what this story says to Dylan Farrow is that she doesn’t matter — and that her reality isn’t real. And that’s what it says about me, too. It says (one more time) that my life, my family, my perceptions of myself aren’t “real” because I’m not “really” who my identity papers say that I am. So if I am not me, who am I?

Photo credit: Woody Allen and his wife Soon-Yi were snapped by photographer Carlos Lorenzo in Barcelona. This picture was offered on Flickr under a Creative Commons License and is used under that license.

I'm a Dallas-based marketing consultant and writer, who specializes in helping start-up technology companies grow. I write (books, articles, and blogs) about marketing, technology, and social media. This blog is about all of those -- and the funny ways in which they interesect with everyday life. It's also the place where I publish general articles on topics that interest me -- including commentary about the acting and film communities, since I have both a son and grandson who are performers.
View all posts by debmcalister →
This entry was posted in Family and tagged adoption rights, adult adoptees, Deb McAlister-Holland, Dylan Farrow. Bookmark the permalink.