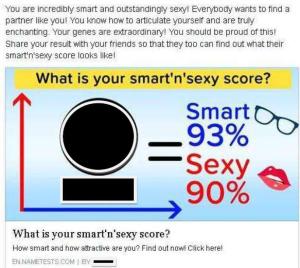 One of 19 Facebook quizzes on one of my friend’s Facebook wall — I blocked her name and profile photo. Quizzes like these can be fun, but it’s important to understand that you’re paying for them with your privacy — and mine, too.

I worry about one of my Facebook friends. Nineteen of her last 20 Facebook posts are the results of Facebook quizzes. All 19 of them were quizzes she took one night last week when she was having trouble sleeping, I think.

If that was a one-time binge, I wouldn’t worry. But it isn’t. She takes four or five of them a day, every day – more on the weekends, or when she’s at home during the day for some reason.

According to her Facebook quiz results, she is charismatic, has broken 65 hearts in her lifetime (so far), is the reincarnation of Audrey Hepburn and is most like her favorite movie character Holly Golightly (from Breakfast at Tiffany’s). Her most used words on Facebook are friends, family, and faith. If she were a cartoon character, she’d be Wonder Woman, but if she were a Disney Princess, she’d be Aurora. Her IQ is higher than Einstein’s, but lower than Da Vinci’s.

I don’t worry that my friend takes these quizzes too seriously. And I don’t claim that I’m immune from taking a fun quiz every now and again. (I was absurdly pleased to get all of the answers right on a Harry Potter quiz, and just as pleased to be told that I would be a wood elf if I lived in Middle Earth.)

What I worry about is that I don’t think that my friend realizes just how she’s paying for those fun quizzes. Yes, I said “paying”. We pay for them – not with cash (in most cases), but with valuable information. The personal information about her likes, dislikes, family, history, and preferences give companies that deal in advertising and customer profiling invaluable information.

Sure, she’s free to trade her privacy for the enjoyment she gets from the quizzes. But some of the information she gives away may be mine. After all, a lot of the quizzes tell you things about your friends. To do that, they have to know who your friends are, and they have to have access to your friends list and each friend’s Facebook profile.

Even if you never take a Facebook quiz, your friends and family may be inadvertently giving away a lot more information about you than you’d want. My data – and yours – is precious and very valuable to well-known companies like Google and Facebook, who earn about $78 billion per year based on how well they know us.

But it isn’t Facebook and Google that I worry about. It’s the 1,200 or so data brokers who aggregate data from hundreds of online and offline sources to create profiles of you and me. I don’t worry about Facebook and Google, because I understand how to restrict what information I provide to the apps I use, and have at least marginal control over what information I provide to them. (Very marginal control in the case of Google, which is why I don’t use Google products except for YouTube – and I sign in with a fictitious profile and email address every time I go to YouTube).

But how many of us are really making smart choices to guard our profiles? If you’re on Facebook, you may have seen posts like this: Who thinks you’re sweet? Who should you write a love song for? Who of your friends belong in your stuffed animal collection?

Seems like just another funny and harmless site that creates viral posts and cashes in on ads, right? Take a closer look, however. Many of the quizzes involve your friends, and to give you a result they must know who your friends are. A perfectly legitimate dialog pops up asking for access to your Facebook account and friends list. Stop and think before you click “yes”.

What you’re really doing is buying a script-generated joke about you and your friends. You’re paying for it by giving them access to your friends list and Facebook wall – including all of your past, present, and future posts. You’re also giving them information about each and every one of your friends without asking for their permission.

But what about all the other quiz and game sites that are based in countries (like the U.S., China, Russia, the Philippines, and India) that lack strict privacy rules? Did you check the background of the quiz company and make a decision about whether or not they could be trusted before you took that test? Yeah – me neither.

The good news is, if you’ve taken Facebook quizzes, you can clean up the list of apps that have access to your data. Log into Facebook, go to Settings and choose Apps in the menu to the left. Now you see a list of all apps and sites that have been granted access. Be sure to click “show all” – you may be shocked at just how many apps there are. If you don’t click “show all”, you’ll see only a summary screen.

In the screen capture above of my personal Facebook settings page, the red circle shows you how to display the apps that have permission to access your Facebook information.

The screen capture below apparently shows that 15 apps have some kind of access to my data – including two companies in which I am an investor. However, I was somewhat shocked the first time I clicked on “Show All” (in the red circle). In actuality, I’d given varying levels of permission to 127 different apps. Yikes!

Once you have a list of the apps you’ve given permission to, go through and remove any you don’t need or want. For instance, I kept Eventbrite, Flickr, and the companies I own shares in – and deleted the rest. Remember, in many cases, you may have deleted the app so that it no longer appears in your list of games, but the company may still have permission to access your information.  I spotted a number of apps I thought had been deleted years ago when I first clicked on “Show All”.

It’s easy to add permissions back if you need or want them later. But never assume that access is a onetime thing – most of the permissions hang around for years even after you’ve stopped using the app.

Identity Theft: The Dark Side of Facebook Quizzes & Data Brokers

According to the ACLU of Northern California, even if your Facebook profile is “private,” when you take a quiz, an unknown quiz developer could be accessing almost everything in your profile: your religion, sexual orientation, political affiliation, pictures, and groups. Facebook quizzes also have access to most of the info on your friends’ profiles. This means that if your friend takes a quiz, they could be giving away your personal information too.

The data brokers create incredibly detailed profiles of American citizens, and market that data widely. It isn’t supposed to be used for credit or job screening, but the operative word here is “supposed”. The Federal Trade Commission issued a chilling report on the data brokers and the information they collect about you and me. Social media sites like Facebook are just part of the problem the FTC detailed in its report — much of the information the data brokers compile comes from public records and off-line sources.

However, a surprising amount of information comes from Facebook, according to a report from the ACLU. Check out the link to this ACLU blog post to see what the ACLU found when it went digging into how identity thieves and data brokers are using the data they get from Facebook quizzes – and just how much data they have access to. The screenshots in the post were certainly eye-opening to me.

For instance, they posted this screen, which shows how much information is available by default unless you’ve taken the step of regularly limiting what information your friends can share without your permission.

Choose your Facebook friends carefully. Many people are excited at the possibility of gathering hundreds if not thousands of Facebook friends—many of whom are friends of friends instead of people they actually know. Anyone you accept as a Facebook friend will be able to view your profile and postings unless you say otherwise.

And if those friends you don’t know like quizzes, they could be giving data brokers access to a lot more than just your name. Here’s a list of the items collected by one of the quiz companies: name, birthday, hometown, education details, all your Likes, photos (including those of your minor children), browser, language, your IP address and your friends list.

Remember that if you’re not sure how you’re paying for the product, chances are that YOU are the product. Your personal details are the product sold by thousands of companies. And it’s not just Facebook quizzes that sell your private information. Most of the online games you play on Facebook, even those that appear to be ad supported, collect and resell information about you. So do the apps that let you “login with Facebook”.

You can usually see what details a Facebook quiz app or game requires on the page asking you to authorize its connection with the social network. Some apps let you choose what information you’re willing to share. If you’re lucky, you can give up as little information as possible and still be able to play the game.

Of course, the problem is that most of us just click “accept” or “allow” without delving deeper into exactly what we’re agreeing to share.

Sometimes, however, not giving the developer access to all of the information it wants will cause it to block you from playing or using the app. If you have teenagers who use Facebook and other social networking sites to play games, take special care to teach them how to protect their privacy, and enforce the rules that make you comfortable about allowing them to use the “free” apps. 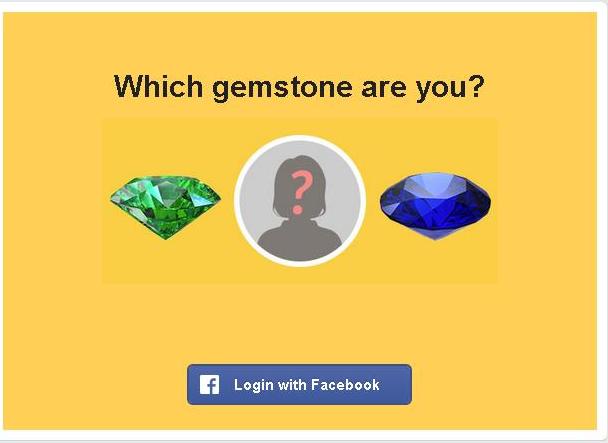 When you “Login with Facebook” to take a quiz, it should open a pop-up where you can set permissions.

Instead of “continuing”, click on “Edit the info you provide” to set permissions. 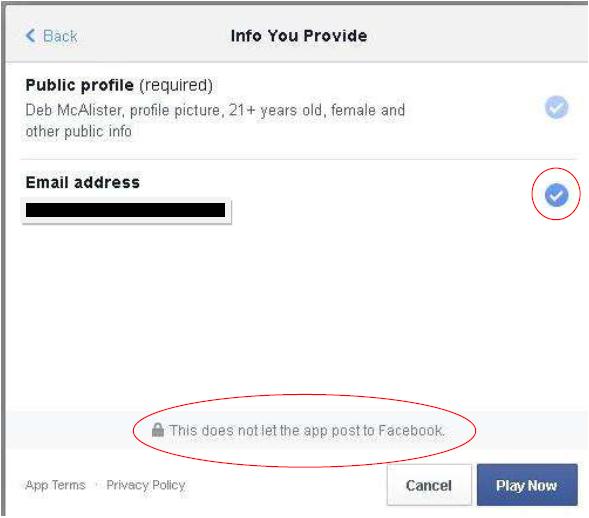 Most apps and quizzes require access to your public profile (name, age, gender, marital status, etc.) before you can play. But you can usually uncheck the request for your email address, and make sure that the app does not have permission to post to Facebook on your behalf.

Many Facebook apps, quizzes, and games ask for your friend’s list. You can uncheck that block to protect your friend’s privacy. If you don’t, you may be giving away information your friends would prefer was kept private — without even the courtesy of asking their permission first.

I'm a Dallas-based marketing consultant and writer, who specializes in helping start-up technology companies grow. I write (books, articles, and blogs) about marketing, technology, and social media. This blog is about all of those -- and the funny ways in which they interesect with everyday life. It's also the place where I publish general articles on topics that interest me -- including commentary about the acting and film communities, since I have both a son and grandson who are performers.
View all posts by debmcalister →
This entry was posted in Family, Social Media and tagged Facebook, Facebook games, Facebook privacy, Facebook quizzes, identity theft, limiting an apps access to personal information, privacy, protecting your privacy online. Bookmark the permalink.