I’ve been to Niagara Falls before — but always from the Canadian side. So, on a recent trip driving my grandson home from summer camp in Vermont, we decided to stop on the American side of the falls.

It was a busy Saturday in August, so we were among about 35,000 other park visitors that day. To say the staff was overwhelmed and the facilities were in poor shape would be an understatement. The sidewalks were cracked and uneven, the parking lots were full, the tour buses were blocking roads, and the crowds were simply overwhelming as bus loads of tourists tried to push their way through in groups while families tried to keep up with their kids in the chaos.

I was using a rolling walker, one of the ones with a seat, walking up the path for the visitor’s center towards the falls, when the wheel hit one of the (many) deep cracks in the pavement — the wheel broke, the frame collapsed, and I hit the ground hard.

While some Chinese tourists looked on with interest, I took a few minutes to try and figure out if I was going to be able to get off the ground or not. (Last time I hit the ground, I broke my pelvis in three places, so it was a valid fear — I have arthritic joints that were already inflamed from driving to Vermont and starting the drive back to Texas, and the fall hurt.) Luckily, my husband and grandson were nearby, as were a pair of young men wearing FDNY t-shirts who rushed to make sure I was ok. A quick assist, and I was back on my feet.  Sore, but determined to make it the last few feet to the railing to see the falls.

I limped the last few feet with help from my husband and grandson. The falls were, of course, magnificent, and Toronto looked beautiful on the clear, sunny day.

I found a bench, and sat in the sun for a few minutes before realizing that (a) my right wrist was swelling and the throbbing pain was getting worse and (b) my hip and knees were sore and bruised from the fall and I had no walker to help me make it back to the car. There were no park employees visible, and no signs on how to call for help. 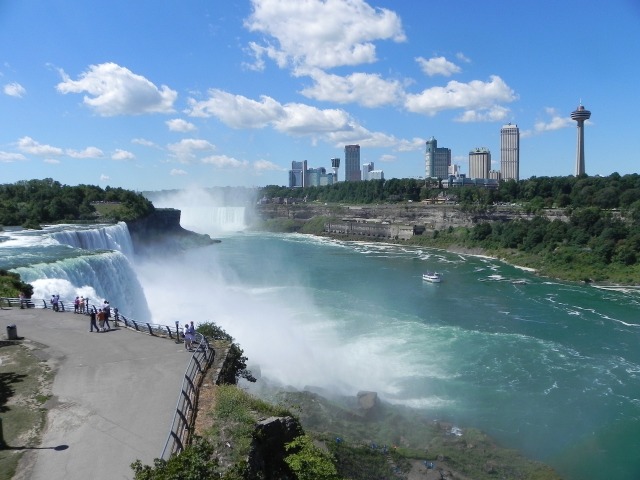 The worst part of the experience was trying to find a park employee who could help me get from the falls back to the car. The park rangers are supposed to have carts or wheelchairs to help injured visitors. With a broken walker and some obvious brushes and contusions, I really did need help.  My husband trekked to the visitor’s center and was promised a ranger with a cart, so after telling them where to find me and calling me to stay put, he went to try to rent a wheelchair to get me from the edge of the park to where we had parked our car several blocks away. but I never saw one although I waited for over an hour.

A number of people offered help, but none of them were park employees. In fact, although my husband talked to the visitor’s center several times and to a park ranger who promised to get a cart and come to meet me, I never actually saw a park employee. Eventually, we gave up and my grandson and my husband helped me limp to the parking lot, while my husband went to get the car and fight the traffic back to the park’s own parking lot which was blocked off with “Lot Full” signs. Luckily, the woman manning the entrance to the parking lot allowed my husband to pull in to get me when the situation was explained to her.

It took two and a half hours after the fall for us to make it back to the sidewalk near the parking lot. This would never have happened on the Canadian side — someone who fell on that side would have had a helpful team on hand in minutes flat. And, of course, the sidewalks on the Toronto side are in good repair — not deeply cracked and uneven the way they are on the American side. Very sad to see one of our national treasures so badly maintained.

We didn’t take the Maid of the Mist boat ride, and the only souvenir I got is a wrist splint and a collection of bruises. That is, unless you count my badly injured dignity and the expensive twisted piece of metal that used to be a rolling walker — it was less than 8 months old, and had been a huge help until it failed to navigate the many cracks in the walking paths at Niagara Falls.

Next time I want to see the falls, I’ll definitely cross the border first.

I'm a Dallas-based marketing consultant and writer, who specializes in helping start-up technology companies grow. I write (books, articles, and blogs) about marketing, technology, and social media. This blog is about all of those -- and the funny ways in which they interesect with everyday life. It's also the place where I publish general articles on topics that interest me -- including commentary about the acting and film communities, since I have both a son and grandson who are performers.
View all posts by debmcalister →
Gallery | This entry was posted in Family and tagged fall at Niagara Falls, Niagara Falls, poor park maintenance at Niagara Falls. Bookmark the permalink.