Posted on November 4, 2011 by debmcalister 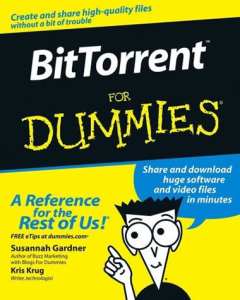 Not to be outdone by the movie, music, and TV industries, a print publisher (John Wiley & Sons) has joined the party and filed its first mass copyright infringement lawsuit  against BitTorrent users.  27 “John Doe” defendants have been sued in the Southern District Court of New York for downloading copies of books published by Wiley.  You can read the complaint here, courtesy of the Torrent Freak website.

And what prompted this latest entry into the lawsuit derby?  Why it’s the popular “Dummies” book series.  Among the titles included in the first round of suits filed are “AutoCAD 2011 for Dummies,” “Day Trading for Dummies”, “Calculus Essential for Dummies”, “Word Press For Dummies”, and “Photoshop CS 5 All-In-One For Dummies.”

What makes this lawsuit particularly ironic to me is the fact that John Wiley & Company is the proud publisher of  Susannah Gardener’s book, “BitTorrent for Dummies“.   The Amazon.com description for that book includes these descriptive phrases:

“Share your home movies or download new software, find safe files to download, create your own, and use BitTorrent for business.  There’s certainly a torrent of interest in BitTorrent! But while it enables you to download all kinds of cool files and to distribute your own creative efforts, it also carries some risks. This book not only shows you how to acquire BitTorrent, but also how to use it without picking up worms, viruses, and lawsuits.”

Given the last word in that description, I guess the John Does targeted by the lawsuit should have bought the book, huh?

There are some significant differences between the suit brought by the book publisher and the other mass BitTorrent lawsuits I’ve seen.  For one thing, John Wiley hired a law firm that has a good reputation — not a copyright troll.

Also, Wiley limited its litigation to defendants who actually live in the southern district of New York. That could be significant, because judges have recently thrown out some of the movie industry’s lawsuits on the grounds that the companies were “venue shopping” — filing lawsuits in preferred jurisdictions when they knew or should have known that the defendants did not live within the court’s jurisdiction.

Another difference is that Wiley didn’t immediately follow the lawsuits with settlement offers to the defendants.  Does this mean that the company intends to take the defendants to court?  I don’t know.  What I do know is that other book publishers are watching, and if John Wiley wins — or even gets a number of defendants to settle — this will be only the first lawsuit by a print publisher against anonymous defendants who use peer-to-peer file sharing networks to share copyrighted material.

Photo credit:  I scanned the BitTorrent book cover for this blog post; the book was purchased at Half-Price Books and Records on Northwest Highway in Dallas, Texas, and it is reproduced here to illustrate a story about the book and its publisher, which my attorney tells me is fair use. I don’t own the image, and you shouldn’t re-use it.

I'm a Dallas-based marketing consultant and writer, who specializes in helping start-up technology companies grow. I write (books, articles, and blogs) about marketing, technology, and social media. This blog is about all of those -- and the funny ways in which they interesect with everyday life. It's also the place where I publish general articles on topics that interest me -- including commentary about the acting and film communities, since I have both a son and grandson who are performers.
View all posts by debmcalister →
Gallery | This entry was posted in Uncategorized and tagged BitTorrent, Copyright, copyright infringement, copyright protection, copyright troll, Deb McAlister, Dummies book series, Dummies books, John Wiley & Sons. Bookmark the permalink.