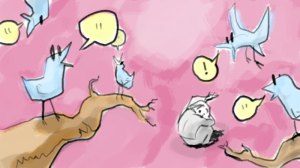 Pete Simon posted this drawing of a man hiding from a world that seems to be all atwitter on his blog.

One of my cousins said that he’d looked at Twitter, and it seemed to him like a bunch of 20-something people without dates sending messages to their friends about stuff he wasn’t remotely interested in.  I showed him my Twitter home page, which is actually filled with valuable information, news about people I care about, and links to reading material I might not see otherwise but enjoy very much.

He asked me to explain Twitter to him, and tell him how he could get a Twitter page like mine.  I put together this list of five basic steps to help him get started on the kind of Twitter experience that he would enjoy, and give him real business and personal benefits.

Use your own name on Twitter.  Of course, there can be only one @philsmith on Twitter.  But even if that’s your name and you didn’t sign up early enough to get that exact name, you can still get a unique Twitter handle based on your name.  My grandson uses filsmif — the name he has on a rugby jersey, Facebook, and other places where people know how to find him.

If you plan to Tweet for business, combining your company name and your name works — and so does combining of your name and your industry.  Consider something like: JaneCLU, AcmeJane, or a descriptive and unique name like P.N. Elrod’s Vampwriter (she’s the author of the Vampire Files books).

Why use your own name instead of something creative?  Because if you find yourself wanting to promote a business, enhance your career, or develop a personal brand, it’s certainly better to do it as yourself instead of as “lippy247” or “TriDeltGirl”.  Of course, some professions lend themselves to handles.  My son is a stunt performer specializing in medieval-style performances (swords, javelin, horseback stunts and falls, hand-to-hand combat, etc.) .  So his handle VegasKnight works well for him.

As soon as you have a Twitter account and handle, upload a photo — preferably of yourself doing something that wouldn’t embarrass you if a potential employer (or romantic partner) sees it.  Images of beers, sports teams, political slogans and cartoons may turn some people off, and I won’t even start on my opinion of a person I ran across lately tweeting for hamburger chain @innout who had a picture and profile that was more suited to a dating site than someone representing a large corporation that prides itself on conservative values.

Last, but not least, fill out the bio.  If your handle doesn’t use your name, put it here.  For example, a friend of mine Tweets as part of her job, and uses the handle (industry)Maven.  Her bio last week read, “Senior executive at XYZ company” — this week, after a job change, it reads, “CEO, (industry) startup to be unveiled 9/1/11”.

Personalize your profile with your website, blog, LinkedInProfile, and other information.  Make the “One Line Bio” your “elevator pitch”.  (That’s what you’d say if you were a screenwriter and got the chance to ride in an elevator with Steven Spielberg — and had his attention only until the doors opened, so you had to give him your pitch in seconds.)

First off, a lot of the “people” on Twitter aren’t.  People, that is.  They’re spam bots who follow people randomly, links to videocam sites that aren’t safe for work, and other sleazy bottom feeders.  If you have no bio, the default avatar instead of a photo, and no followers (or if you are following thousands of people and have only a few of your own), I will likely assume that YOU are among the “tweetbots”, and will not follow you.  (More likely I’ll actively block you.)

So pick a few people to follow.  How?  Start with journalists or authors you read — the first three people I followed were my friends, journalists David Coursey and Walt Mossberg, followed by SF writers CJCherryh, JKRowling (@TheJKRowling — yes, even the power and might of Rowling’s IP empire didn’t snag her real name as her Twitter handle before someone else got it!), and Jerry Pournelle.

Go easy on the following to start with.  I try to limit myself to 3-5 follows for every follower — but the truth is that I can’t really read Tweets from more than a few dozen people anyway.

How do you recruit followers?  Put a “Follow Me” button on your website, in your email, on your blog.  ASK your friends and family to follow you.  (Saying please works more often than you might think!)  And, of course, publish interesting Tweets that people want to read.  Use hashtags  (more about that later), and reply to messages from the people you follow.

Using the #ff hashtag is a good way to add followers.  What’s that?  Each Friday, Twitter users use the hashtag #ff to recognize the tweeters they follow in an online event known as Follow Friday. Anytime you see a friend or entity you know share a Twitter user’s screen name preceded by #ff, this is their way of sharing with the world that they not only approve of their tweet content, but hope you will follow them on Twitter, as well.  (For instance:  “#FF @debmcalister, @DistribionDM, @distmarketing, @davidcoursey”.)

Twitter is a huge place — and not all of the content out there is interesting or appropriate for every user.  So how do you find stuff you want, and avoid having your screen filled with stuff you’d rather not see?  Hashtags — short phrases or abbreviations preceded by the pound or number sign (#) — are Twitter’s version of the Dewey Decimal System for libraries.  They’re like giant folders that keep things organized.

They also let you quickly search for and find information.  For example, on February 22, when a devastating earthquake hit Christchurch New Zealand, #eqnz was the gathering place for people from around the world who wanted to follow the news as it happened.  There are hashtags for everything from well-known brands and trade associations to celebrities, events, diseases, and dog breeds (just to name a few I’ve searched recently).

Just try it — search for the key words you want using the Twitter search window at the top of your Twitter home page.  You’re sure to see a lot of messages that look like this:  10 Lessons I’ve Learned On #Twitter – http://bit.ly/8lGvs4   Let me decipher this typical Tweet for anyone who’s really new:

When I thought I was finished with explaining hashtags to my cousin, he looked at me and said seriously, “So how to I apply for a hashtag for my business?  Who controls them?”  You control them — if there is one already in common use, just add your comments to the existing “folder”.  If you want one for your own brand or event, just create one by sticking #YOURNAME into a tweet.

This is how it happens in a disaster or big social event — the first person who wants to tweet about something — say the death of actor Peter Falk — tweets “So sad about #peterfalk”, and as other people come online to share their thoughts, they use the hashtag until a large group of messages is available for anyone to see.

In a webinar I attended a few years ago titled A Beginner’s Guide to Business Tweeting, the social media gurus at Hub Spot  put this ahead of recruiting followers and following anyone.  They advise  putting some tweets out there as soon as you get your profile set up.  I can’t argue about that.

There are many different kinds of tweets.  Here are a few of the most common:

Remember that everything you say is both public and searchable.  Don’t say anything you wouldn’t say at a networking event.  Even if you delete a tweet, it might still be archived and searchable. Legal restrictions on what you can and can’t say — copyrights, non-disclosure agreements, confidentiality clauses in contracts, and regulated information related to your job — apply on Twitter (and everywhere else online, too).   So do the laws of slander, libel, and obscenity.

There are three ways to participate publicly in a Twitter conversation.

Twitter also enabled “DMs”  (direct messages) which are seen only by the intended recipient.  Don’t assume that these aren’t public statements, however, or that regulators, employers, or spouses can’t get access to them.  Also, if you send a DM to a celebrity or public person, don’t be surprised if you don’t get an answer — on the other hand, you just might.

This is my no means an exhaustive overview of Twitter, and it may be too basic for many readers.  As you get more experienced with the medium, you’ll look for tools like Klout and Twitter Grader and Twitpic and many, many others.  But these five steps got my cousin started, and judging by the number of jokes and links and comments he’s tweeting, he seems to be having a good time.  Maybe they’ll help others, too! Happy tweeting!

I'm a Dallas-based marketing consultant and writer, who specializes in helping start-up technology companies grow. I write (books, articles, and blogs) about marketing, technology, and social media. This blog is about all of those -- and the funny ways in which they interesect with everyday life. It's also the place where I publish general articles on topics that interest me -- including commentary about the acting and film communities, since I have both a son and grandson who are performers.
View all posts by debmcalister →
This entry was posted in Uncategorized and tagged Deb McAlister, Hashtags, social media, Twitter. Bookmark the permalink.