Court Says Online Reviewer Can Have Her Say – For Now

Posted on January 7, 2013 by debmcalister 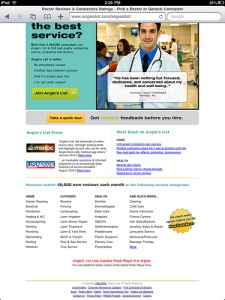 One of the first blog posts I wrote on this blog, on April 7, 2011, was titled Online Review Lawsuits: Sometimes the Truth Isn’t Enough. Written for anyone who has thought about writing a review of a business, the post explained the critical difference between opinions which are protected by the First Amendment to the U.S. Constitution and factual claims, which are not protected.

A few months later, I followed that up with a look at the problem of online reviews from the viewpoint of business owners who feel victimized by online reviews. That September 16, 2011 article was called Yelping About a Bad Review? You’re Not Alone.

I thought that I’d pretty well covered the waterfront on the basics surrounding the litigation risks of online reviews, until Yale Law School Professor Adam Cohen took to the pages of Time Magazine this week with the latest legal ruling in this arena. Cohen’s excellent article details the experiences of retired military officer who posted a negative review of a contractor who had worked on her home in Fairfax County, Virginia.  In short, she won a portion of her case (which is a victory for free speech advocates and anyone who posts online reviews) and may wind up losing another portion of the case (which reminds us all of the potential price for writing an online review).

Jane Perez is a Virginia homeowner who wrote reviews on Yelp and Angie’s List explaining why she was unhappy with the work a local contractor had done on her home.  He sued her for defamation, asking for $750,000 in damages.  Further, he asked the judge to have the bad reviews removed or rewritten, and a judge in a Virginia state court ordered her to rewrite or remove the reviews while the case was proceeding.  That unusual step drew attention from national free speech groups, who helped Perez appeal the lower court decision.

In December, the Virginia Supreme Court reversed the decision that required Perez to rewrite her reviews, saying that online reviews should not be censored, and that the focus of the earlier litigation should be on monetary damages – not having the negative comments removed.

As Professor Cohen wrote in his Time column, “The ruling is being hailed as an important victory for freedom of speech on the Internet, which it is. But it is also a reminder of the risks that come with being an online critic. Sites like Yelp! and Amazon give ordinary people the power to write reviews that have a major impact on other people’s reputations and livelihoods. But it also means that they can be held legally responsible if what they write is defamatory.”

That’s really the key point here, and it can’t be restated often enough. Websites like Yelp and Angie’s List are shielded from being sued for defamation by federal law (47 U.S.C. § 230, to be exact), but the people who write those reviews are not protected. Neither are blogs and websites owned by individuals and companies who don’t fall under the “common carrier” provisions of the law. (That probably means YOUR website and YOUR blog, unless you happen to run a giant “common carrier” site like Facebook or Twitter — and courts in other countries are increasingly going after those sites, which are NOT protected globally, only here in the U.S.)

The ruling sends a message to business owners:  if you feel that you were maliciously targeted in a false or defamatory online review, you can sue for damages, but you’re probably not going to get Yelp, Angie’s List, Amazon or any other online review site to edit or remove the review until and unless you win.  Finding an attorney who will take a case for damages against an individual without provably “deep pockets” is nearly impossible, of course, so unless the person who authored the review is a celebrity, business tycoon, or named member of the Forbes Rich List, expect to pay at least $10-50,000 to fund the litigation.

But it also sends a clear message to consumers who feel they were scammed or sold shoddy goods or services:  you can probably say what you want, but it may wind up costing you big time if the business you vent about takes you to court.  There are some pro bono groups that will help individuals caught up in cases like these, but it can still be an expensive and time-consuming process to defend yourself.

How expensive? An acquaintance of mine was told that she was looking at a minimum of $20,000 to defend herself against a $12,000 suit by a contractor whose work she panned in a Yelp review.  My attorney told me that the $9,000 I paid for a floor that started coming up months after the carpet & tile store installer failed to remove an old sub-floor after I paid extra to have it removed was “a bargain compared to what it would cost to sue them”.

Of course, the size of the suit against you may make the cost of defending yourself irrelevant. It’s important to note that the $750,000 in damages being sought against Ms. Perez is far from the highest damage payout awarded to a business or individual over an online review or forum posting.

Back in 2006, a small business owner in Florida secured an $11.3 million damage award against a former customer who made defamatory comments on an online forum – even though she knew that the defendant had no chance of paying the damage award. The angry businesswoman said that she funded the litigation herself to “make a point.”  The loser in that case had lost her home to Hurricane Katrina and was living in a FEMA trailer, and didn’t even  bother showing up in court to defend herself. Maybe she subscribed to my mother’s favorite saying about the past-due bills she blithely threw away if I didn’t pay them for her: “I don’t have anything for them to take — you can’t get blood out of a turnip.”

I don’t know what happened after the court’s decision. I wonder  if the “winner” wound up collecting the insurance settlement on the house lost to Katrina, the loser found her wages garnished or saw her income tax refunds confiscated for life towards paying off her judgement? Any or all of those things can happen.

I met one guy who won a Las Vegas jackpot of about $1.2 million on his 60th birthday – and had every penny withheld to satisfy a judgement (with interest) for a car accident he had while driving without insurance at age 18. That left him to pay the income taxes on the $1.2 million “windfall” he never got.

A lawyer in my neighborhood gleefully (and frequently) recounts the story of how he won a multi-million dollar verdict against a small business owner for one of his clients, only to have the company shut down rather than pay the claim.  My neighbor wound up collecting every penny several years down the road when the man’s wife bought a $1 lottery ticket and won.

So while my internal free-speech advocate wants to celebrate the Virginia Supreme Court’s decision to leave Perez’s original review intact and online, the part of my brain labelled “practical business owner” keeps repeating, “Be careful how you phrase your online reviews. There are lines – and if you cross them, you may wind up paying for it!”

As a reminder of just what those lines are, with tips on not crossing them, here are some related posts on this blog:

Disclaimer:  I am not a lawyer; nothing in this blog post should be construed as legal advice.  Always consult a knowledgeable, licensed attorney before making legal decisions.

Note: This blog post was updated & edited on January 8, 2013 after a spokesman from Yelp posted a comment that pointed out a factual error in the original post.

Photo Credit: Photographer Sarah Perez (no relation to Jane Perez) made this screen shot of an Angie’s List sign-up page available under a Creative Commons License on Flickr.

I'm a Dallas-based marketing consultant and writer, who specializes in helping start-up technology companies grow. I write (books, articles, and blogs) about marketing, technology, and social media. This blog is about all of those -- and the funny ways in which they interesect with everyday life. It's also the place where I publish general articles on topics that interest me -- including commentary about the acting and film communities, since I have both a son and grandson who are performers.
View all posts by debmcalister →
This entry was posted in Law, Social Media and tagged Amazon.com, Angie's List, cyberlaw, Deb McAlister-Holland, digital law, free speech, law, online reviews, protecting yourself from being sued over online reviews, social media law, sued for online reviews, Yelp. Bookmark the permalink.