Posted on February 6, 2013 by debmcalister 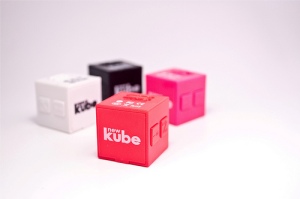 Sandy Berger, a correspondent for the syndicated Computer America radio program, reviewed a new version of the KUBE MP3 players after this year’s CES show. Today, she posted this on her Facebook page.

“BTW, the new KUBE that I just reviewed says that “Only Facebook Fans get warranty for theKube players” I’ve never heard of this before. Has anyone else? Any lawyers out there want to tell me if this is legal?”

As much as I respect Sandy, I thought at first that this was a joke. Who ever heard of a company offering a product warranty only to people who liked them on Facebook? So I looked it up. And sure enough, there it is, in black and white, “Only Facebook fans get a free 1-year warranty.” You can see it for yourself at this link: http://www.newkube.com/support/

A company that could require consumers to Like a product on Facebook before honoring a warranty would have a major advantage in the new Facebook Graph Search, where a premium value is given to “engagement” with users – the more recent the like, the higher you rank, and the more likes you have, the higher you rank.

Is this a great new marketing ploy – or a dangerous legal high-wire act likely to draw the ire of judges and regulators?

It just could it be that Ollo Technologies, the U.S. company that sells theKUBE MP3 players here, might also be uncertain about predicating a warranty on a Facebook Like.  Here’s why:

If you Google the phrase “KUBE MP3 Player Return Policy”, you’ll get to this Return Policy page. There’s lots of talk about restocking fees of up to 50% (ouch!), but nothing at all about having to like the product on Facebook before you can return it.

Then, there’s this link for Warranty Registration in the upper right hand corner of every page of the company’s website.  It asks for purchase information, but doesn’t mention Facebook.

Almost as soon as Sandy posted her question, several Facebook friends and fans weighed in with comments and questions of their own. I’m a geek about things like this, so I wasn’t content to weigh in on my own. I referred the question to Sean E. Tuma, a partner at Britton Tuma. Sean is a lawyer who loves questions like this, and knows more about social media law, cyber law, and all things related to digital technology and the law than anyone I know.

Sean’s answer was conditional – of course. (When is an answer from a lawyer about something brand new and untested ever unconditional?)

At first glance, without any extra research, he thinks that it does seem that it would be possible for a company to predicate some type of warranty or return policy on consumers taking action in a social media forum. But it’s not a clear-cut issue, and there could be problems with state laws, Facebook’s TOS (terms of service) agreement, and a host of regulations.

“I would think they could do this for certain kinds of express warranties,” Sean said.  “But they would have to be very, very careful in how they do it.”  I learned a long time ago that when a lawyer says a business person has to be careful, it usually involves lots of (expensive) legal research and review along the way.

Seems likely that more than one lawyer will get wealthier before it’s clear whether or not marketers can hail this as a great new way to garner tons of social media interaction with consumers. This product is cheap enough to be almost disposable, so I don’t think very many consumers will want to bankroll the cost of suing to make a federal case out of the warranty policy.

But I’m betting that some lawyer will figure out a way to make money off a class action suit. Or, more likely, some regulator or legislator will get up in arms over the digital divide and start opining that it’s unfair to require someone to go online and click a button as a condition to getting a warranty. (Of course, since digital music is by definition based at least in part on access to a computer, this seems like a stretch to me – but when has a little thing like common sense ever gotten in the way of a politician’s rhetoric?)

I’ll be interested to see how this turns out. If this tactic works for theKUBE, I suspect we’ll see other companies following their lead. If you want more detail, including Sean’s detailed breakdown of the potential issues, contact me with a verifiable real ID and email address (no freemail accounts unless I know you personally, and no out of US email, please) and I’ll send it along.

UPDATE (February 11, 2013): After this post appeared, a comment was posted by the company which clarifies the situation substantially.  According to that comment (which appears in full following this post if you are reading it on the post’s individual page instead of the home page –click on the headline of the post if you are on the blog’s home page), the company intended to offer its Facebook fans an extended warranty, but “an error in the copy-writing did not express our original intention to give fans additional warranty.”

It seems that all purchasers get a six month warranty, but “liking” the product on Facebook can result in an additional six months of coverage.  That seems to be different, legally speaking, than limiting the warranty only to Facebook fans.

I'm a Dallas-based marketing consultant and writer, who specializes in helping start-up technology companies grow. I write (books, articles, and blogs) about marketing, technology, and social media. This blog is about all of those -- and the funny ways in which they interesect with everyday life. It's also the place where I publish general articles on topics that interest me -- including commentary about the acting and film communities, since I have both a son and grandson who are performers.
View all posts by debmcalister →
This entry was posted in Law, Management & Entrepreneurship, Marketing, Public Relations, Social Media and tagged Britton Tuma, Computer America radio show, Deb McAlister-Holland, Facebook likes, Facebook terms of service, KUBE, law, legal, litigation, MP3 player, newKUBE MP3 player, product warranty, Sandy Berger, Sean Tuma. Bookmark the permalink.

6 Responses to Can a Company Require Customers to “Like” It on Facebook to Qualify for a Product Warranty?